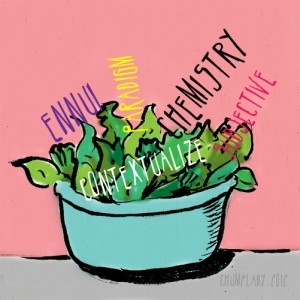 Chump Lady used to be a think tank editor in her younger days. Think tanks are those marble buildings on K St. in Washington, D.C. where “policymakers” work — usually people with impressive credentials and colossal egos.

Think tank publishing is mostly vanity publishing and not every book was stellar. But I learned an important lesson as a young editor. There was a direct correlation between good writing and clear messages — and bad messages and WTF-is-the-point-here?! word salad.

Word salad is when you string a bunch of five-dollar words together that appear to have meaning, but actually signify nothing. Writers who didn’t have anything of substance to say, but still wanted to appear Very Important were the worst word salad offenders. The kind of people who say “paradigm” a lot.

One of my favorite actual word salad sentences during my tenure was: “It aspires to a position of synthesis.”

“This makes no sense whatsoever,” I wrote to the author — so he recast the sentence to read: “It aspires to a position of synthesis with respect to other values.”

The point of word salad, near as I can tell, is to intimidate. It’s a crazy offensive play to dazzle you with bullshit, and if you resist, they will just gibber jabber at you more insistantly…. with respect to other values, you MORON! If you persist in failing to understand the word salad, they will look at you pityingly. Clearly this discourse is too sophisticated for one such as you.

“I am not defined by my relationships” is cheater word salad. At first it sounds vaguely reasonable. Then you think about it. Huh… then what ARE you defined by? Wife, mother, neighbor — these things play no part in your identity? What is the point of such a statement? “I am not DEFINED…” (condescension) “By my relationships.” (If you have a problem with my cheating, well such fuckbuddy “relationships” do not define me.)

Flutter and vagueness are large ingredients of word salad. The cheater doesn’t want to be pinned down, or directly understood. “I didn’t say that. Did you say that?”

Betrayed spouses then apply their own Rorschach test to word salad. They look at it and interpret what they want to read into it. Oh, maybe that means remorse. Or maybe it means I am the person really at fault here. I think they’re saying they didn’t do anything wrong…. or maybe they’re saying they did… shit, I can’t tell.