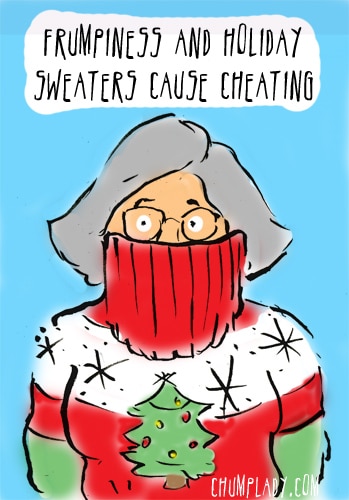 Poor Holly Petraeus. It’s not enough that she’s publicly humiliated by her husband General Petraeus’ infidelity scandal, the world has to snark about her matronly pant suits and gray hair. Oh sure, she’s a class act who does a world of good for military charities and families of deployed soldiers, but have you noticed that she looks like a 63 year old woman?! Menopausal, squidgy around the middle, not exactly fashion forward. Not that there’s anything wrong with that. Just saying she’s not winning any West Point fitness awards. (Oh hey, come to mention it, neither is Paula Broadwell.)

When people talk about Holly Petraeus, they use the “f” word —  frumpy.

You know everyone is comparing her to Paula Broadwell and thinking: can you blame the man? Broadwell is 20 years younger than Petraeus. Okay, so Broadwell appears to possess all the moral sense God gave mold spores — but you can bounce quarters off her abdomen! She’s taut and firm! And when it comes to getting a bit on the side, some men can overlook a flaming case of narcissistic personality disorder (especially if they may be similarly afflicted).

After reading all the digs at Holly Petraeus’ appearance, I’m wondering — is it a crime to be frumpy? Is there some causal relationship between frumpiness and cheating? One holiday appliqué sweater and your man is cruising Ashley Madison? Is that how it works?

I, like many women, was raised to think that beauty was an insurance policy in life. Maintain an ideal body weight, style your hair, and put on some lipstick or Terrible Things Will Happen. My grandmother used to spend an hour dressing for dinner each night and was prone to utterances like “that maternity outfit is not very slimming,” or “if you stood up straight, you’d lose 10 pounds.” As you can imagine, she was a joy to be around. But what she lacked in subtlety and compassion, she made up for in good looks. The woman had an enviable complexion into her nineties and a designer wardrobe to die for. For a woman of her generation who couldn’t go to college, being beautiful worked for her. She married a successful man who was devoted to her.

But I don’t think pretty people should get smug that infidelity can’t happen to them. Halle Berry, Christie Brinkley and Eva Longoria were all cheated on, to name just a few supernaturally attractive people. You wonder if beauty insulates them from at least some of the hurt of betrayal. I imagine people saying to their utterly forgettable partners — dude, WTF were you thinking?! Whereas the Holly Petraeus’s of the world hear, “Dear God, she’s let herself go. What can you expect?”

Age conspires to make frumps of us all. Some of us succumb to frumpiness and some don’t go gently into that good night. Of course, there is the danger of tipping into the “mutton dressed as lamb” demographic, but the world generally gives you an A for effort. We much prefer our public figures to be botoxed, dieted, and tucked into some approximation of eternal youth. Woe to the frumpy.

We deconstruct frumpiness in women, especially in cases of infidelity. What do her looks say about the state of her marriage? Here is my arm chair shrink analysis, FWIW.

After infidelity is discovered, the cheating spouse often wants the betrayed spouse to compete for attention with the affair partner. I call this the “Humiliating Dance of ‘Pick Me’!” And I think a lot of betrayed spouses fall for it. I will up my game! I will use my gym membership! I will dress sexier! My feeling is that the game is rigged and there is no winner. The goal for the cheater is just to stay central in the dramatic contest for their affections.

This dance says — I can’t win this game, so I’m not even going to try.

Are Holly Petraeus’s dowdy pant suits saying that? Do you wonder if maybe this isn’t Petraeus’s first rodeo and she gave up trying to compete long ago?

Or maybe she’s just a woman who was secure in her marriage, who thought she was loved, and thought it was safe to age in the manner that 99.9% of us do — imperfectly.