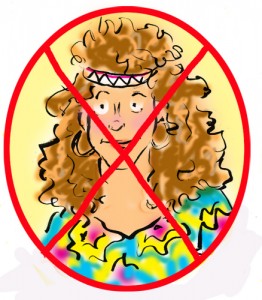 Did your cheater define you? One thing I’ve noticed about people who get out of relationships with a cheater is that they often have trouble reorienting themselves in the world after having been typecast as something they’re not.

After time with a cheater, and with constant reinforcement, the betrayed spouse got used to believing whatever it is they got typecast as (a hard ass, ditsy, dim-witted). Then they get a breath of fresh cheater-free air and discover – whoa, the cheater had me all wrong. Why didn’t I clue into this sooner?

I think this is an especially pernicious phenomenon after a long marriage with a serial cheater.

My marriage with a serial cheater was brief (DDay was six months in, the marriage endured with separations for another year and a half). But even within that time I would bump up against his perceptions of me, resist, and then shut up and succumb to them.

Some of those perceptions seemed sort of cute, if ill-fitting at the time. He’d tell me I was a “hippy chick” or an “arty chick.” There is a nugget of truth in both statements (and that’s the ticket, you have to have some buy in). Yes, I eat granola. Yes, I was a liberal arts major. Yes, I draw cartoons. But it was a way to pigeonhole me – oh, you’re one of Those People. That was useful for him in two ways. First, he liked to collect things. (Three cars, three motorcycles, umpteen fuck buddies). I was like wife action figure Hippy Chick. A coveted part of the Total Wife Collection.

Second, it was a way to make me Other. To feel superior to me. What would you know? You’re a “chick.” A fluffy, unserious, colorful accessory. Truth of the matter is I went to better schools than he did (London School of Economics), did contract work for the UN and World Bank editing papers on macroeconomics, worked at the Defense Department as a writer, and was making it in the world as a single mother. I’m nobody’s dummy. I’ve never worn tie dye or smoked dope. Okay, I did eat hummus and send my kid to a Waldorf school – but I bathe. I don’t smell like patchouli. My point is I’m multifaceted. Contradictory. Complicated. Just like everyone else.

I think he really did see me as a hippy chick. I don’t think it really went any deeper than that. I spackled and created connection with someone who saw me two-dimensionally. If I’d clued into that, I would have seen that he didn’t really love me, because hell, he didn’t  even KNOW me.

My husband suffered from this too. He was told for decades that he was “difficult to live with.” A hard ass. Insufferable.

I’ve lived with insufferable, and let me tell you – my husband is a dream to live with. He does his own laundry. He pays the bills. He’s organized and considerate. He remembers every birthday and holiday and gives thoughtful gifts. He’s affectionate. I could go on and on before you gag me – my point is – the man lives his life constantly in consideration of others. If I’d fault him for anything, it’s being codependent. For flinching at being on the receiving end of gifts.

But, no, he went through life convinced he was impossible. Because his ex told him so. He’d warn me – oh, hey, I know I’m difficult. WTF?

It was a mind fuck. And look, I’m sure he was difficult living next to the chaos of someone who was not doing her laundry, paying bills, or considering her family. That shows a person up. So what’s a cheater to do? Turn that shit AROUND and pin the “difficult” tag on YOU.

Demonizing someone, of course, makes it that much easier to cheat on them too. See how that works?

So, if your cheater told you were bad in bed, or don’t know how to fold socks properly, or are a hippy chick – I give you permission to erase that bullshit. You’re YOU. And I can’t wait for you to discover a world out full of people who dig you, for you. Who relate to your true self, and not some cardboard cut out. Enjoy!