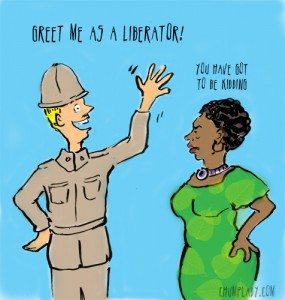 I was walking with my husband the other night and discussing my next blog post with him. I was thinking how my useless masters degree from SOAS (the School of Oriental and African Studies, University of London) in African history actually pertains a lot to the study of infidelity. He was skeptical. “I don’t know,” said the man with a useless masters degree in comparative literature from Columbia. (Asked why he didn’t continue with a PhD he often says “I couldn’t spend that much time contemplating George Elliot’s use of the semicolon.”) He had reservations. “Don’t use words like ‘oppression.’ People will think you’re one of those ridiculous women’s studies majors.”

Frankly, African Marxists have a lot of interesting things to say about oppression and mindfuckery. LOTS.

It surprises me that more people do not see infidelity in terms of, well, oppression. Marxists would have a field day studying infidelity — the allocation of ego kibbles, who controls the means of production. Cheaters cheat to maintain a position of advantage over you. Colonizers colonize for similar reasons — advantage. You there, worker bee, make me kibbles so that I the narcissist may consume the kibbles! Let me construct a system that guarantees me kibbles and ensures the primacy of my needs, while you receive little to no kibbles and enjoy serf status! See how that works?

Human nature is replete with examples of people fucking one another over. Of grabbing resources, by artifice, deceit, or aggression. Selfishness is apparently in our genes they say. So why are people surprised that these primal, human dynamics come into play in our relationships? The grab for the goodies, the stepping on another’s neck to get what we want? It’s not just for armies in the history books — it might be your spouse.

That of course is what makes it so frightening, and why we have to blame the victim. We only do shitty, colonizing, genocidal things to Others. Not the people on our own team!

But they’re very similar cheaters and colonizers. It’s not enough to bonk someone over the head and steal their kibbles. Yeah, you get some kibbles, but it’s a very short-sighted business plan. If you want a continuous supply of kibbles, you need to convince the subjugated that it is Right and Good to give you kibbles. That is the Natural Order of Things. In short — you need to colonize their minds. THAT is how you build an Empire. Convince people that oppression is what they deserve. It only happened because they enlisted and cooperated. And if it’s painful and seems unjust? That’s their fault. You’re a bad subject! Mindfuckery is the great tool of oppressors everywhere.

“Decolonizing the Mind” is a seminal essay by the great Kenyan writer Ngugi wa Thiong’o. He discusses how Britain colonized Kenya not just by force or creating global markets, but through the British Empire and its cultural institutions. Through the very language Kenyans used to express themselves. While he loves Shakespeare and many things about Britain, he concludes that Kenyans must “decolonize their minds” and write in their native languages. They are not “less than” because they are not British.

People write about infidelity — oh, there are “no victims, only volunteers.” Which I find both offensive, and true. I find it offensive because it is this reductionist, blame the victim view of infidelity — you signed up for this. You chose this. You allowed it to happen. And really, it wouldn’t have happened if you didn’t have such a bad picker/didn’t get fat/insist on monogamy/have another kid/change jobs ad infinitum. It absolves the colonizer cheater of responsibility. It rewrites history. We didn’t come with guns and take your shit. No, you realized you were inferior and couldn’t handle things and you needed superior people to come and build you railroad lines. The discussion is not about oppression, entitlement and cruel choices — instead it devolves into a discussion about the deficiencies of the subjugated, what they lacked that caused people to colonize them (which really was the best thing that could ever have happened to them, and shouldn’t they be grateful?)

Yet, I find “there are no victims, only volunteers” true in that yes, every tyrant needs subjects. We often fail to realize how much we allowed ourselves to be co-opted, how colonized our minds were, how much bad treatment we “volunteered” for, all the while convincing ourselves that this is natural. That is the most humiliating thing about infidelity — we accepted this crap partner as our right and due. We worked hard to be good subjects in a relationship that was rigged to deny us kibble reciprocity. We thought we weren’t good enough. We thought it was natural that the cheater come first in all things. We’ll just work harder and try to be a bit more grateful for what they give us. We’ll make our needs smaller and smaller. Because that’s what faithful subjects do.

The oppressive regime can crumble, but you’re often still left with a colonized mind. You’re a Kenyan forgetting your native tongue. But you were once a vibrant person, fluent in your own identity. The crap of infidelity is not over until you decolonize your mind.