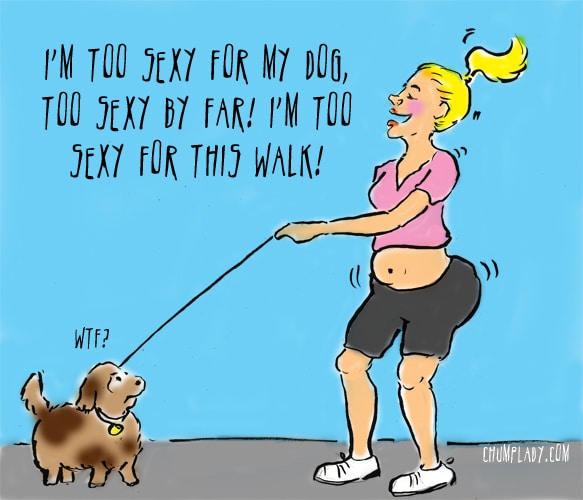 You have done such a wonderful job describing the cheater. Can you please give me insight into the mind of the other woman? It boggles my mind how a woman, who has kids of her own, can get involved with a married man with three kids? And when the affair was discovered and we were supposedly trying to reconcile, the OW would drop her kids off at school and then “exercise” by walking around my block with her shirt rolled up?

I don’t get it. Please help me understand.

Well, perhaps the poor dear can only get her Vitamin D intake by exposing her pasty midsection? That’s such a bizarre detail! You want me to hazard a guess as to what’s in her head? How about: “LOOK AT ME! My postpartum tummy is firm and unblemished! Behold! And lust me!” … Or pity me as an attention whore. It’s all good. I’ll take whatever ego kibbles I can get, even if it means lapping the neighborhood half-naked.

I don’t know, Pearl. Sounds like a mindfuck to me. She’s hoping you notice. And you noticed.

But I think your question is what are other women thinking that allows them to screw married men? Well, Pearl, I don’t think Ms. Midriff is thinking of you at all except as an obstacle to her happiness. You’re not in her world. Which is more than can be said for your husband. He’s not thinking of you at all either, and he lives with you! A pretty astounding mental trick when you think about it.

I have to confess that I haven’t made such a big study of Other Women. Some chumps hang out on OW forums to figure out what makes them tick. I didn’t do that. The major OW in my story was bipolar, and she’d been an OW through all three of my ex’s marriages. It’s a special kind of fucked up, for sure. That was a skein I wasn’t particularly interested in unraveling.

I would say though, that I don’t think all OW tick in the same way. At one end of the spectrum are unwitting OWs. They’ve been duped too. At the other end of the spectrum are the disordered nuts who get their sick jollies from competing with the wife and having the guy show his ultimate devotion by chucking what is supposedly dearest to him — his family — to “win” her.

1. They think the man is available. I know, duh, he’s NOT available. But from their perspective, he is because he is pursuing them, or is open to their advances. Neither of them have any boundaries. They take his interest as a green light to proceed. And the cheater is usually floating all sorts of bullshit, that he’s separated, or he lives chastely with his wife as a “roommate,” or she has a wasting illness that prevents her from performing her wifely duties. Whatever bullshit they spin, the OW wants to believe it. That’s how all conmen con — we want to believe in what they’re selling. (i.e., he’s available and I’m special.)

2. They don’t know. Similarly to #1, there are OW who simply don’t know they are OW. Maybe they met the guy on match.com and he represented himself as single. Thing is, this should be a short-term affliction of cluelessness. Eventually the scheduling conflicts and cell phone secrecy, it has got to dawn on them he’s married. Now, I’ve read OW turning that around on chumps — hey, I didn’t know, how come YOU didn’t know he was cheating? Well, it’s a fair point, except that the guy is married to you. Being with you is where he is supposed to be. It shouldn’t be on your radar that your husband is cheating, whereas if you’re in the dating trenches, it should be on your radar that the guy isn’t acting available.

Once an OW clues in? She should get the hell out and tell the wife. But a lot of them seem to succumb to the Humiliating Dance of “Pick Me” and stick with the affair, at least for awhile. They’re hooked on the sparkly, rainbow kibbles. And unpredictable supply creates demand and fucks up your head, as we know.

3. They’re think they’re edgy and sophisticated. Today’s HuffPo piece is illustrative of this kind of wingnut. Maybe they freebased too much Sex and the City, but OW like this seem convinced that they’re central in some romantic drama that lesser mortals cannot understand. They speak in breathy, Harlequin romance speak, convinced their cliches are profound. From that HuffPo piece by (I kid you not) someone named “Whiskey Tortoise:

The secrecy and the heartache we shared have long given way to thrilling memories.

Whiskey Tortoise is fitting really for this sort of OW. Synonymous for inebriated reptile, which you’d have to be to write something so patently stupid. (No offense to tortoises, who I’m sure are very nice as cold-blooded creatures go. Unlike OW.)

4. It’s a sick competition. At the end of the spectrum, you have the real sickos who get off on competing with the wife and kids. Regular affair kibbles are not enough. No easy, breezy fuck on the side for them. No, they require supreme sacrifice and total allegiance. They want the guy to give up something significant to demonstrate fealty to her — his wife and kids. It’s a competition and she must win it.

My husband’s ex was one of these sociopaths. She was a serial cheater and only screwed married men with kids. According to her former business partners, one of the guys showed up with an INFANT on his hip at their workplace one day, as she bragged about their affair. She did eventually (after she was discovered and divorced) get one of the OM to leave his wife and small kids for her.

All I can say about people like this is they’re disordered. Completely without empathy. All cheating involves narcissism, but what is so telling about these sickos is the wife isn’t a theoretical construct to them. Some distant background noise, a nagging presence. No, the wife is someone who must be eliminated from the arena. Humiliated. Conquered. I think these OW are very aware of what they are doing and why. Part of the pleasure is mindfucking the wife. This may be the sort of person you’re dealing with, I’m so sorry.

All I can advise you is let her have him. Worst karma you could inflict on your cheating husband would be to let him live with her. People like this destroy every life they touch. It’s what sociopaths do best.

Previous article: Financial Infidelity
Next article: A letter from a child of a cheater — Don’t stay together