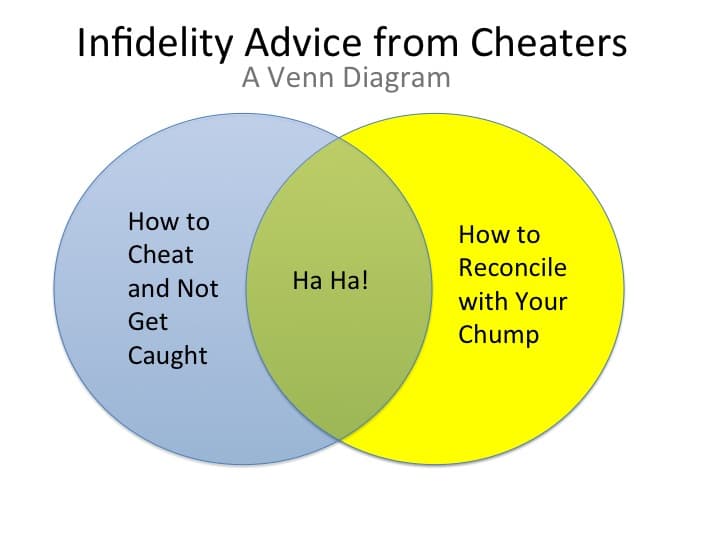 Every day or so people send me goofy articles on infidelity. Maybe goofy is the wrong word. Offensive? Dunder-headed? They run the gambit from spouses being abducted by midlife crisis aliens, to breathy, text-speak — How 2 Cheat on UR Boyfriend! I generally reply something to the effect of — oh wow. Yuck.

Apparently, there is a whole genre of infidelity literature written by cheaters. It falls into two camps — how to be a better cheater and not get caught — and how to reconcile with your chumpy spouse. Which makes me wonder exactly how much overlap there is on that Venn diagram.

The less said about the How to Be a More Effective Cheater sites the better. I mean there isn’t really much to discuss there other than a) “use the same soap” is terrible advice and b) you are a sociopath.

More intriguing are the Very Sorry Cheaters who would like to give chumps a glimpse inside their head. Ostensibly this is done for the greater glory of reconciliation. Sort of like those former bank robbers who do home security TV ads now.

“Affair Advice” is one such Reformed Wayward site (thanks to alert chump monika for the link). I had to weigh my desire not to send site hits to this nitwit by blogging about him, against my urge to deconstruct his bullshit. I erred on the side of ridicule. I mean really, who could resist when he refers to chumps as the “embittered, mean-spirited, will-always-be-the-victim Betrayed Spouse community.”

Can’t you feel the love?

The guy is a doing a public service, but not for the reasons he thinks. The site is a good look into the brain of a cheater during reconciliation. It mouths all the reconciliation truisms “Affairs are 100% wrong!” but then dishes out steaming shit piles of justifications for them. Poor sausage had FOO issues. He was miserable in his marriage. He felt “trapped.” Happy people don’t cheat. The problem with betrayed spouses is they don’t forgive, because they’re petty and small that way.

I’ll believe the guy doesn’t cheat anymore, but just like a dry drunk he’s got all the disordered thinking  without the acting out. Every word drips with condescension and blameshifting, even when he’s attempting humility.

Affairs are 100% wrong and I was 100% wrong for the decisions I made to start and continue one, even if my marriage had become crap.  My poor marriage, and my inner demons, were the “reasons” for my affair, but not an excuse.  There is none.  Many Betrayeds have a hard time grasping this concept, but it’s the truth for the majority of affairs.  Happy and content people in solid marriages rarely have them.  But that’s not an excuse either.

It was wrong to steal the cookies, even though mommy left them out where I could reach them and she knows how much I love cookies and was denying me cookies. No, stealing cookies is wrong. Wrong! Wrong! Wrong! I was hungry for cookies — that’s a reason, but not an excuse, okay? “Eat an orange,” mom said. FRUIT. As if. Look, happy and content children don’t steal cookies. Am I saying my mother doesn’t feed me well enough? Is it her fault I was hungry for cookies? I’m not saying that. I’m saying happy children don’t steal cookies. It’s not an excuse.

My affair was not just the expression of a man trapped in an unsatisfying reality, but also a reaction to the many hurts and injuries done to me by my parents and others in my childhood. I was compensating for these things at some level, although this is definitely 20/20 hindsight. I didn’t realize it back then, and I’m still trying to work it all out on my head.

People were mean to him as a child. I’m sure none of you ever had that happen. But it’s okay, he’s happy now. Well sorta.

I’m no longer semi-happy.  I’m very happy. PERFECTLY happy? Hardly. But I feel content in my marriage. Optimistic. Happy. Looking forward to whatever years we have left together. I feel like part of a ‘couple’ again.  I don’t feel like the guy I used to be any more. But 2 years ago, I certainly did feel like a man trapped in a low-conflict, but dull, existence. It was a big reason for why I ended up where I did.

So stay on your toes, Mrs. Affair Advice! If he tips over into “semi-happy” again there’s no telling what he might do.

But chumps, don’t just read this site for genuine imitation naugahyde remorse, read it for the hypocrisy! On affair partners telling chumps about the affair:

This blog entry is NOT for people who are in, or were in, an affair and purposely tell their Affair Partner’s spouse about the affair – whether it’s dead or not. That’s mean. Vicious. And a horrible betrayal of your Affair Partner, no matter what happens. I know because this happened to me. She thought by telling my wife that my wife would throw me out (and into her arms). It backfired. Drastically. Instead, I terminated things with her immediately and I will never forgive her for this and other vicious things she did and lies she told me. If you are the Other Man or Other Woman, you have no right to do that and it’s a stain on your character or maturity if you do it or contemplating it. Revenge is a bad idea. Don’t do it.

The vicious hussy! She LIED to him, can you believe it? She broke the sacred bond between affair partners. She BETRAYED him!

What she was supposed to do was part in sweet sorrow. Remember the good times, maintain a shrine to him, and fondly caress the receipts from their half-price dinners at Ruth Chris’s steakhouse. But no! She didn’t do that! She repugnantly stained her character by telling the truth.

Curiously, he doesn’t rail against the Other Woman for hurting his wife with the knowledge about their two-year affair — no, the indignity was against HIM.

She lied to me. In big ways. She did all she could to hurt me and my wife when I terminated things with her based on a D-day that she herself engineered. But that’s not why I went back to my wife. But she certainly has shown me that I made the right decision and averted a real disaster.

The OW engineered a D-Day, so I’ll assume that means she blew the whistle on him. Apparently she “lied” because she was going to stay in her side dish place and remain a secret. But no, she ended the cake, which is NOT what affair partners are supposed to do. He still feels “betrayed” about this — yet wants his readers to believe he’s really very sorry about cheating. WTFuckity Fuck?

So this guy has the colossal cojones to dispense with affair advice? Oh, and why am I referring to him as “this guy”? Because he blogs anonymously. Not only won’t he give his name, he refuses to publish any comments “judging” him.

What, you’re still not convinced of his remorse?

Well that must be because you’re one of those embittered, mean-spirited victims who cannot forgive and move on. As he likes to say, over and over and over again on his blog, hey, if you can’t forgive, you can’t reconcile. But there is a limit to his patience, chumps. A guy can’t wear ashes and sackcloth forever. At some point you need to own up to your part in this. His advice to cheaters?

At least for now, do not say anything which will give the impression that the betrayed partner was responsible for your lies to them or in any way caused your behavior.  There will be plenty of time to share blame during times of productive conversation with your mate.

And forget about transparency. What is the point? A person is entitled to their privacy. Okay, he made a mistake, but eventually a cheater will tire of this “humiliation and control.”

After the disclosure of my affair, I know my wife went through my work bag, my drawers and papers. Probably my car too. I know she went on searches on the internet to see what I may have posted on message boards. I was electronically stalked by her for at least a solid year. Web pages I had visited were scrutinized, as was every Facebook post I made in the past or present.   I’m sure I don’t even know all the things she did to discover evidence and to verify my fidelity to her in the wake of the affair and, frankly, I don’t want to know. I had to tolerate this humiliation as part of the price I paid for the huge sin I committed. At least for a while, anyway. I accepted that, even if I didn’t like it and although, once we were well into reconciliation–after a year had gone by– I began to resent the questions (which really were thinly-veiled accusations) that resulted from her searches and scrutiny.

Chumps, this shit is on you because you’re insecure.

Often, untrusting people are insecure people, and there aren’t enough “hoops” that you can jump through in order to make an insecure person feel secure. They tend to be black-holes of emotional need, and it will never be enough.  These searches, accusations and interrogations tend to continue no matter what. Few spouses tolerate this type of humiliation and control indefinitely.

No, chumps, the best course of action is to find it in your heart to forgive him and eat the shit sandwich. Don’t ask too many questions. It will only “set you back.” And he will reward you with respect and gratitude for understanding his Mistake. Of course, he was utterly lacking respect and gratitude when he cheated on you, but hey, you get some props now for not throwing him out on his sorry ass. Even though you are petty and unpredictable, he appreciates you.

No matter how angry, petty, or unpredictable they get, they have shown a great love for you and, in many cases, a great strength of character in choosing to try to trust you again. Give this decision, and your partner, the deserved respect and gratitude.  Many betrayed spouses don’t have the character and maturity and true love to forgive someone.  Many are often too invested in being the victim. Yours isn’t. Appreciate it.

Because he appreciates YOU. Really he does. If the shoe were on the other foot, he’d do the same for you. Nothing angry or petty or vengeful about this guy. No sir.

Would I ever hit my wife, even if I caught her in the act with three men simultaneously, one man in each orifice. Leave her? Yes. Get a lawyer and try and take her to the cleaners? You bet.