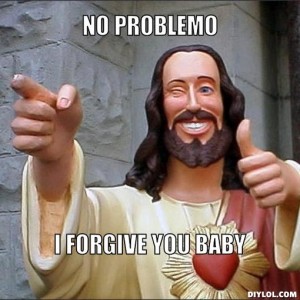 Hey chumps, I know several of you guys are bloggers. Forgive me for not giving each of you a shout out (but do post the link to your blog in your screen name, or feel free to link to it in the comments). But today I thought I’d let you know about a new blog started by our very own Full-Steam-Ahead — called Divorce Minister.

Good blogs have a niche, and this niche is sorely needed. FSA is taking on all the religious mumbo jumbo surrounding infidelity. The cheap grace, the forgiveness spackle, the Jesus cheaters. He’s got a M.Div from Yale and he’s kicking ass and taking names. (Okay, really he’s providing thoughtful, considered debate, but hey, that’s pretty badass.)

Now, you might not be of an evangelical protestant Christian persuasion, so maybe this blog isn’t for you. But I think we can all commend FSA for creating a safe place for people who are struggling with their faith and the horrors infidelity.

So many people stay stuck with cheaters because of their religious background. Because of this idea that they are obliged to forgive someone regardless of whether or not that person shows remorse or acts of contrition. Or they stay stuck in marriage because they feel divorce shame from their religious community. Somehow divorce is more shameful than infidelity! Or people feel betrayed by the congregations who side with the cheater and their new affair partner. Or look the other way at affairs in their own community.

A faith community is supposed to be a safe place. So imagine the multiple betrayals that arise when your cheater is under girded by religious “authority” to abuse you? Or your congregation doesn’t call out the sin that is abandoning one’s family, and instead expects you to just get over it and forgive already? Jesus cheaters do a lot of harm and I’m glad someone is blogging about it.

I probably say “fuck” too much and am not much of a religious expert to take on these issues. I’m a preacher’s kid with a potty mouth. A lapsed Methodist with more snark than scripture. But I am curious — did you have a Jesus cheater? Did you struggle with your faith after you were cheated on? Did you get support from your church, temple, or mosque for divorce? Did your cheater find Jesus after they cheated on you and now Jesus forgives them so you should too? Did you drive your cheater off with a crucifix and some holy water?

Previous article: Making Character Cool?
Next article: Dear Chump Lady, He’d have never met her — if I’d only been better?