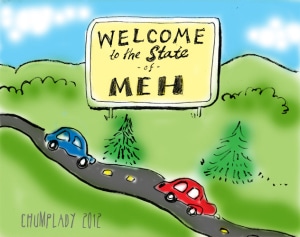 I can hardly believe it, but February 6, 2015 is not so far off. For me, that day is the one-year anniversary of being publicly humiliated in front of friends at a social gathering/party, when my partner of 6 years met another woman (kibble tosser). They would go on to have a “courtship” of 7 weeks of blissful, deceitful cheating and lying.

As the date approaches, I’d like to do something mighty and meaningful — something to mark the occasion of my new freedom (though I didn’t realize it at the time). I’m curious what chumps have done to celebrate freedom/re-claim their peace on the anniversary of their D-Days, especially when they hit the one-year mark.

Many thanks for your blog, your work and your spirit,

I suggest you do absolutely nothing.

Treat it like one of the other 364 days in the year. I promise you, as time goes by, you won’t measure the increments of your life by how far out you are from D-Day.

Not that you’ll ever forget what day it was, you probably won’t. (November 29, 2006). But it will cease to matter. I have absolutely no idea what I did on November 29th this year. Probably dreaded dragging Christmas boxes out of the attic.

Look, you “mark the occasion” of your “new freedom” by being free. You celebrate it every day. Think of the cheater-free change as a lifestyle choice. Like kicking gluten, only more satisfying. (You can stop being a chump AND enjoy cupcakes!)

I get that anniversaries can also be solemn events like 9-11, or the invasion of Normandy and such, but we don’t ask ourselves what kind of party we can throw on 9-11 so the terrorists don’t win. We reflect on the day, the sacrifices, the horror — and then we go embrace life with more gratitude.

Don’t get me wrong, I’m all about taking back our lives after infidelity. But why stop at one day? You want a new ring? Buy a new ring. You want to turn your living room into a giant staging area for your model train collection (that your ex hated)? — do it. But stop giving centrality to cheaters and the shit they pull.

February 6, 2014 was the day you found out who he really is — a guy who sucks. You changed your life accordingly. That’s enough mightiness for today, February 6, 2015, and all the days after.