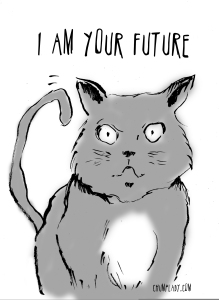 Despite two years of separation and impending divorce, I am still angry and upset. I want to smack this asshole upside his head. His stupid sister actually told me deserved to be cheated on because I was weird. (Apparently I’m too chatty and slightly scatterbrained). Last I heard wedding vows did not say unzip your fly because wifey is absentminded and a chatterbox.

But what really bugs me is I am stuck. I cannot move on. I’m angry and want to lash out at him and it won’t matter because he has moved on. (As my youngest son says, Dad moved on at the beginning of your marriage — you have a lot of catching up to do.)

Is there anything you can say to shake me out of my fog?

Gee, someone you’ve considered family for years just said you’re weird and deserved to be cheated on and you wonder why you’re upset? (You sure it’s him you want to smack upside the head and not her? Make it a twofer?)

You’re not yet divorced. It’s going to suck now. You don’t have any finality. The settlement hangs in the balance. You’re still legally and emotionally tied to this person, and if he’s like most cheaters, he’s probably fucking with you. Fucking with the settlement. Swanning about town with his Schmoopie. Blithely skipping over his obligations, ignoring the wake of destruction he’s caused.

It’s not a super fun time, JAC. It’s a battle to stay sane. And it’s a battle you have to wage on many fronts. He’s out there with his narrative that your chattiness Drove Him To It. It’s a slog to get through the legal process, divide the assets, figure out custody. It’s a battle to stay physically healthy and not sleep deprived and emotionally exhausted. And add to all that — you’ve got the slings and arrows of an ordinary adult life. Working your job, raising your kids, getting the sixth load of laundry done.

You need to keep your eye on the prize, JAC.

Oh. Can it be my date to the office Christmas party?

Oh. Will my self-respect keep me company as I grow old alone with cats?

No. The cats will keep you company. And they’re much friendlier and easier to live with than cheaters. And you can chat to them all you like, they don’t mind.

Who CARES? Fuck ’em! Personally, I’d find you a lot more perplexing living with a serial cheater than I would divorced. But there are people out there who will find your eccentricities endearing, who will love you right, and be true to you. Go invest in THOSE people. Why spend one more minute of your life lamenting marriage to a cheater?

Look, I know you’re grieving, and that is perfectly natural now, but there is going to come a day where you wake up (it’s a Tuesday) and you wonder what the fuck you ever saw in this person. Why you ever thought losing them was a bad thing. There will come a day where you trust that he sucks and you know the Other Woman (Women) aren’t getting a prize — they’re getting a cheater. His passive aggressiveness, his dirty underwear, his bitchy sister — she gets all that wonderful and more. (She gets the Ashley Madison dating profiles too!)

There will come a day when your new life eclipses your old life and you accept. We call that “meh” here — when you get to the point where this person no longer has the power to hurt you. You won’t allow it. You’re too invested in your new life to look back.

Until then, JAC, keep marching. Call in the tanks and the artillery if you have to. But keep marching toward Meh.

Previous article: Come Back to Us, Dean!
Next article: Cheater Freak Christmas Contest!