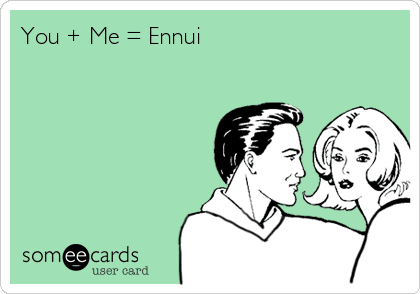 What is with the cheaters gripped by ennui? My cheater started cheating about a year ago with a co-worker. I had noticed that he was texting her a lot a few months before the affair became physical and he typically dismissed it as “a work friend”, she was “very interested” in the business, etc. When I started to get more insistent that the relationship was interfering with our home life and that it was hurtful to me, he also typically got mean and defensive.

About a month after I sensed something was really wrong, he announced out-of-the-blue that he was moving out. Except, he didn’t move out. He was just mean and kept threatening to move out. Not really understanding affairs or what was going on, I stuck my head in the sand and did the pick me dance for another month. Then, things got so unbearable living with him and his constant gaslighting and abuse that I kicked him out (this was last May).

He was sleeping out of the house for about two months (on friend’s couches, at OW’s house, wherever), but coming and going as he pleased during the day and to see our daughter. During this time, he could have gotten a place to live, but did not. He even slept at work sometimes according to co-workers. He kept constantly threatening divorce, but didn’t do it.

In July, he wanted to come back home and I let him because I desperately still wanted the marriage. This was a huge mistake. He kept working with this woman, which of course, killed me. He didn’t seem very remorseful at all.

Finally, at the end of September, I basically gave him an ultimatum to cut all ties with her or I was moving 500 miles away with our daughter to be close to my family. There was a bit of back and forth drama, but it basically ended with me kicking him out and having my mom move in with me temporarily so he couldn’t enter the house. I also went no contact with him and only communicated about our daughter through an intermediary.

I then retained an attorney to figure out the best way to move 500 miles away with my daughter. He told the attorney that he didn’t want to get a divorce, but would allow me to move my daughter if I did a post-nup with him to end our community property. He said he’d follow later to “work on the marriage.” I agreed to it in order to move, but I also still wanted to believe that he truly wanted to save the marriage and would follow us in a couple of months.

Long story short, I moved in December, but we never signed the post-nup. Why? Well, I had exposed his affair to friends and family, as well as the OW’s circle. I had done it in a very nice way, letting them know what was going on and in the context of wanting to save the marriage (like, hey, this is going on. Please help!). Well, he was mad about that and tried to insert a clause into the post-nup essentially saying that I would not say anything disparaging about him or his “friends.” Obviously, I would not sign that. He threatened to file because I wouldn’t sign, but did not.

So, after I establishing residency in my new county (it takes three months), I recently filed for divorce. I have been no contact with him for many months, so filing wasn’t so hard. He could have filed for divorce after I moved, but he did not.

What I don’t understand is his total lack of initiative in really doing anything to formally end our relationship even though he wasn’t going to do anything to actively save it. I get at the beginning he was trying to eat cake by staying at home but threatening to leave (it’s a great way to someone to play the pick me dance). However, he didn’t do anything even after I moved 500 miles away and went no contact with him for MONTHS. Was he gripped by angst? Just lazy? I don’t get it. Why hang on to someone who has not even talked to you for 6 months? Who won’t even talk about kid visitation except through a third party? There is no cake to even eat.

Explain cheater ennui? Well, there are several variants. First, cheaters often don’t file for divorce, despite doing everything in their power to fuck up the marriage, because of impression management. Divorcing you would make them the Bad Guy, and it’s much better if they can point the finger at you as the Quitter and all around Rotten Person.

See, he was going to come around on that “save the marriage” thing. You just rushed it! It’s only been months! He’s a delicate and broken and these things take time.

By forcing your hand and making you file for divorce, he (in his fevered mind) gets to be above reproach. He’s the Superior Person and you’re Shiva the Destroyer.

Point out that actually you’re just responding to their destructiveness, they’ll go batty on you with the cognitive dissonance. It gets ugly when you question the impression management. (I imagine a little PR firm run by Henry Ford and his goon squads, shooting labor unionists.)

In any case, I think it worked out very well for you. You got to relocate on your terms, have possession of your child, and now you can divorce him from a position of greater power. So, well played!

Second reason cheaters do ennui? They’re adept at discarding. When you see people as kibble dispensers and kibbles move out of reach, do you really want to work for those kibbles? Gosh, do I have to get up out of this comfy chair and, like, interact? Now?

You’re kind of like that mess in the corner you were going to get around to. That backpack full of last year’s school papers that needs cleaning out. But, then again, why? Just chuck it and buy another. Or shove it in a closet. Out of sight, out of mind.

These people just aren’t that deep. You’re a thing to procrastinate. You want a response? Oh, then that’s you trying to manipulate THEM into the pick me dance, and they aren’t going to do it. No sir! Sure, don’t contact them for months. Whatever.

Third reason cheaters do ennui — it’s a power move. Sure he can ignore you, but what is really delicious is that you want a divorce. So he isn’t “hanging on” to the relationship so much as he is thwarting you from getting something you want. Cheaters LOVE that shit.

It doesn’t matter if he said he wanted a divorce, or threatened it himself. He wants power. He wants cake. You’re working against him. So you want something? Agency? A life without him? Respect? Nope. He’s not cooperating. You’re Not the Boss of Me.

And you know, so long as you’re still legally tied to them, there is the possibility of cake. They might want to hoover you back if the current kibble supply doesn’t work out. If we just stay in limbo, maybe they’ll wear you down and you’ll toss some kibbles their way again! Wouldn’t that be nice?

At the end of the day, PigletWiglet, don’t over think this. You’re 500 miles away and gaining a life. Looking back at his motivations is untangling the skein. He fucks with you because he can.

Previous article: Kids and Affair Partners — The Unavoidable Shit Sandwich
Next article: Dear Chump Lady, How do you get through the middle of leaving?