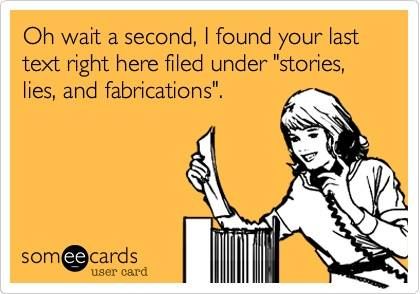 A lot of my Chump Lady mail can be divided into two categories, “I got chumped… what are people going to think?” and “I got chumped… and my cheater is telling people terrible things about me.” Both followed with “And what can I do about that?”

Nothing. Sorry, chumps. You can’t do anything about what people think of you, and what people say about you.

Look, I know it’s unjust having your cheater telling bald-faced lies about how controlling, sexless, abusive, hairy-legged, and insane you are. Worse, I know some people whom you once thought cared about you (such as your in-laws) are inclined to believe it. This infidelity crap is a one-two punch — betrayal, and then more lies.

Okay, maybe it’s more like a continuous thug-kicking by a motorcycle gang than a one-two punch. Betrayal, lies, character assassination, gaslighting, alienation, and alimony. Anyway, my point is, leave the impression management to the crazies. You just keep being your mighty self.

Previous article: Be a Hellraiser, Not a Chump
Next article: Etiquette for Mistresses?