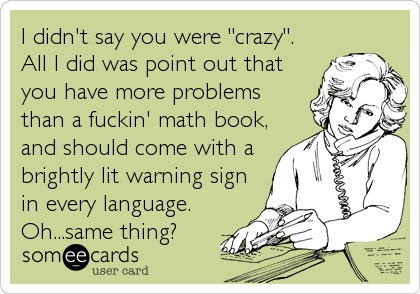 Wouldn’t it be nice if every toxic person just came with a giant forehead tattoo? Then you could really sort the wheat from the chaff. But as we chumps sadly know, they don’t. And we have the therapy and legal bills to prove it.

I’m often asked — did you see any signs? What would you do differently? How did you discover you were dating a flaming personality disorder and not a mild-mannered  government employee? (No offense to our hard working civil servants, I mistakenly assumed a 20 year career in a federal bureaucracy meant my ex would be a solid, if dull choice.)

Did I see signs? Yes. But at the time, I had no way of reading them. No wingnut decoder ring. Part of this was my own chumpiness — what signs I saw, I spackled — and part of it was nothing like this had ever happened to me before. To my knowledge, I’d never been cheated on (of course you could argue, I was a chump, how would I know?) It was really beyond me to imagine that some people are predatory and are capable of living a double life. Like most people, I view the world through my own moral lens. I knew about mental illness, but I didn’t really understand personality disorders. And I certainly wouldn’t recognize a sociopath if he bought me dinner.

This blog is mostly a long recitation of Don’t Make the Idiotic Mistakes I Made Once. So, yes, I’d like to think I’m smarter and wiser now. So, for what it’s worth, here’s a list of the signs I would now take as red flags. Please add your own for the benefit of future chumps everywhere. Maybe if we could spot these people earlier on, and more importantly, identify our own chump weaknesses — we could avoid some serious heart break and wasted years.

(Or we could resort to forehead tattoos.)

Anywho, here’s my list. Keep in mind any couple of these could be perfectly normal, but added up? Yeah, I’d take a pass. Without further ado…

1. He moved fast. Infatuation feels great, but after a few weeks of dating him, it occurred to me that he liked me a bit too much for someone who didn’t know me that well. Of course, who doesn’t like to be adored? Kibbles are awesome. But, as I’ve said elsewhere, they’re also junk food without substance. The flattery, the attention, the sex. It’s all very heady. People who study personality disorders call this phase “love bombing.” It was a full sparkle onslaught. After our second date he told me he wanted to date me exclusively. In less than a month he told me he loved me. Within 4 months he talked about wanting to marry me and by 6 months, he was spending a lot more time at my place than his own.

I thought this was okay, because he “wanted a commitment.” But I remember saying at other times “What exactly did I do to impress you so much?” Even to a chumpy idiot like me, it seemed over the top.

But like every sucker, I wanted to believe. The sparkles hooked me. I thought Mr. Sparkles was the real guy. I should’ve slowed it all way down. I’m convinced they can’t disguise the crazy for over a year. He amped up the drama with “needing” to take a job out of state. He pushed for a commitment because of the move. Again, I should’ve not felt rushed. Crazy people usually want to seal the deal and fast. Once I was married, moved, and isolated — then the abuse really began openly.

2. He called too much. It almost seemed clingy. But I see now, as an experienced serial cheater, he was gaging my whereabouts. He wanted to know what I was doing that evening, and the next day. He checked in a lot. I didn’t see him every day, but that didn’t strike me as unusual. I had a full life. But he was anxious to keep me on the line and interested in him. As I later discovered, when the other life was revealed, he was constantly checking in with the OW and other women. How he managed to do work a job or perform life chores was beyond me.

3. He cancelled plans at the last minute. I should add to this, he was strangely unavailable for important dates, like his birthday. Or available to see me after I’d been gone a week out of town. The shady inability to manage his time was the hugest red flag I got. And his anger at ME when HE was the one to bail. I was understanding the first several times. Then I dumped him. He then began a new charm offensive to win me back, and was good as gold (so I thought) until I married him. He never canceled a date again — he just got better at taking his life underground.

4. When I was with him, I felt charmed. When he left, I felt uneasy. I couldn’t even tell you why. I had a gut feeling. Then he would appear again, and charm me and I’d think I was overreacting, or had him wrong. It was me, my issues. Nothing to be paranoid about!

5. I mistook intelligence for character. He was accomplished. Made a lot of himself from humble beginnings. Had advanced degrees. Earned a good living. I mistook this for character — I read things into that that were not there, like he was a good person, or he knew how to manage money, or he had any common sense. Yes, he was intelligent — and so what? He was a dreadful person. He was disdainful of anyone else’s intelligence. He Knew Best. The dentist, the doctor — they didn’t know their job, he knew more. He had to be the smartest person in the room. The arrogance should’ve been a huge red flag. I stereotyped him — thought he was just an alpha lawyer, a bit jerky. I projected warm fuzzies on to him that were not there. “Oh he’s a marshmallow, deep down.” No — scratch the surface and it was bedrock jerk.

6. He was okay with a lack of reciprocity. I was a single mother who earned a fraction of what he earned. After we were engaged, and he moved in with me for months, he never paid a single bill, never bought a bag of groceries. Reason given — he had his house to maintain, his ex-wife cleaned him out in the divorce, etc. I should’ve noticed how free he was to spend money on himself — and not on our shared life. Big chumpy mistake. I thought my generosity meant he would do the same for me. I assumed. Wrongly.

7. Either he didn’t introduce me to his friends, or he simply didn’t have friends. He was the picture of charm with my friends. To a person (with one exception) they adored him. And while we did group outings with them, he did not have a group of friends that ever invited him (or us) anywhere. He said his ex-wife got their friends in the divorce, and most friends his age were married and busy with family. Seemed reasonable. His close “friends” lived out of state (douchebags I met at my wedding). He had work acquaintances but no real friends. He wasn’t introverted. I should’ve puzzled at that.

8. He was vague about his past. I couldn’t get a real time line on when he was married to wife #1 and #2. When what happened. Over the years, the story always shifted, but I remembered snippets of it, enough, that I was able to track down #2 and get her story (a horror fest, he was a serial cheater — same OW). If you think that’s odd — consider that when it did come up he would go into this convincing sad, spiel about how he’d had therapy and realized He Wasn’t The Best Husband, and wasn’t bitter towards his exes, and he wished them well, etc., etc.

Now, as a chump? I’d see that as total BULLSHIT. He told me they cheated on him. I thought it was painful, that’s why he didn’t bring it up. His narrative was nothing like a chump narrative — all the easy forgiveness, the We All Made Mistakes Here — total crap. But I thought that was the enlightened therapy speaking. He was just very evolved.

10. He was shit at gift giving. They say this is the hallmark of the narcissist — they suck at gifts. (Give you something? Why? What’s in it for me?) He did some grand gestures, but they always involved something for him too — a nice dinner out, a trip somewhere (that we went Dutch on). Actual GIFTS? Once he recycled something he gave his mother and she didn’t like it. (A black shawl. Seriously).

To give a gift well you need empathy. You have to think… what would Tracy really like? (My husband is awesome at this). Pinecone elves! PG Wodehouse! British movies! These things are distinctively my fetishes. To give me these things you’d have to put aside your disdain for 1940s Xmas kitch and buy the pinecone elf because you know it would please me (even though you think it is a dusty waste of $15). Because to please me pleases you.

Chumps, I should’ve known I deserved better. You deserved better too. Tell me — what signs did you miss? What will you look for in the future so you don’t get chumped again? Let’s make a list!

Previous article: Dear Chump Lady, How do they flip so fast?
Next article: Chump Lady Ages Into Another Birthday