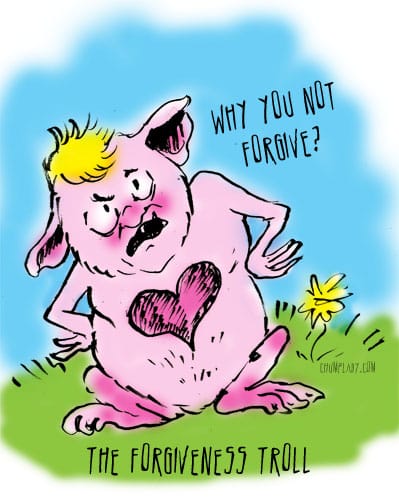 My divorce was final just 3 months ago in October. I went back to using my maiden name. I have been living with family since June (7, going on 8 months) and I expect to be living here until May. Meanwhile, cheater ex and the OW live together. Life is going on. I am moving on as much as I can from D-Day.

I was out with my sister, her husband, and another couple the other night for dinner. I am the 5th wheel. My 8-year-old son calls me in the middle of dinner and I answer. He is with his father for the weekend. You bet I’m answering. He is telling me about his weekend. OW bought him Beats earbuds. And they made rock candy!!! Can WE make candy at home?? I love that he called me. It’s the reason I bought the phone in the first place. I was doing what the Sane Parent does. I listened and showed interest in what he was doing.

After I hung up, my sister said she was really impressed with how I handled that so well. I was happy to receive the praise and told her that it’s hard when it comes to the OW. I have been completely No Contact (she blocked me when I found out who she was) and as much as I love my son, I don’t want to making f*%$ing rock candy. But, I am gracious with him. HE is trying to navigate his new world. I said that I was just happy that Cheater Ex and OW seem to treat my son well.

After hearing this, the married friend (woman) across from me said something along the lines of “and you need to forgive her.” I had to ask her to repeat herself. And she actually said it again. I furrowed my brow, leaned in and said, “Jane (not her real name), I have to forgive myself for picking the Cheater in the first place. And, SHE knew what she was doing when she started a relationship with a man who had a wife and child.”

My anger came quick and unapologetically. My blood pressure soared and I feared I had upset others at the table so I apologized for snapping at her. I mean, the tension was tangible. My sister had to stop her from saying anything else. (My sister and brother-in-law were on my side. They were as angry as I was that she would even broach the subject. During dinner. In a public place. But I didn’t realize it until we got home.)

Jane and I are friends. We both actively seek relationship with God. We both know that we have been given grace and blessings that only God can give. And I understand that there is a grain of truth to what she said. But how dare she? It’s this kind of stuff that sets me back on my road to Meh. It makes me feel alone to navigate my experience, my trauma, and my healing in a world of smug, married people. Until you’ve walked in my shoes, you don’t get a say. And you certainly don’t know the timetable for healing. It’s different for everyone. I dare you to take a moment to just PRETEND your spouse did what mine did. I bet you can’t even handle that, Lady.

So what would you have done? Other than posting on social media as I have done before, how do WE, the Faithful Ones, best handle these people? Because, frankly, I wish to be direct and firm. And angry. Is that anger considered “righteous anger”?

What would I have done? Tracy probably would’ve sat there gobsmacked at Jane’s smug idiocy and fumbled for a rejoinder. Chump Lady, however, would’ve let loose both barrels. (Consequently, Chump Lady doesn’t get invited to too many dinner parties.)

“So, Jane, you sanctimonious bitch, who appointed you Jesus? Nice of you to sit there smug, enjoying the incandescent glow of your coupledom, and tell this recent divorcee how she’s doing Rebuilding Her Life All Wrong. Forgive the OW? A cheater who thinks she is perfectly splendid and did nothing wrong? And who doesn’t want my forgiveness?

“Yeah, Jane. I’ll order up some instant magnanimity to go with my shit sandwich entree. Now then, as long as we’re giving orders — Quit cheating on your husband, Jane. The only sort of person who squirms around chumps and demands chumps unilaterally forgive cheaters, are cheaters themselves.

“How dare I say such a thing? How dare I make assumptions about your personal life and morals? Oh Janey, Jane, Jane — I’d rather be me than you. Is that a syphilitic boil on your neck? You should have that looked at.”

Chump Lady would then get up and excuse herself from Jane’s company.

I know, Conniered. We never think of these things when idiots broadside us. I think you handled it quite well. You naturally got upset. If anyone should’ve apologized in that instance, it’s Jane not you. She’s the one who gave offense! Even if she was the most misguided of Forgiveness Trolls, she should care that she hurt you. I’m not reading where she was tripping all over herself to apologize.

Oh that’s right. We can’t apologize to the Bitter People.

Look, forgiveness is nobody’s business but YOURS. Next time someone asks impertinent questions about your forgiveness status, do what my Methodist minister father does when people proselytize at his door — he asks about their sex lives.

Previous article: UBT: “Found Myself and Had an Affair”
Next article: A Public Service Announcement for Remorseless Cheaters