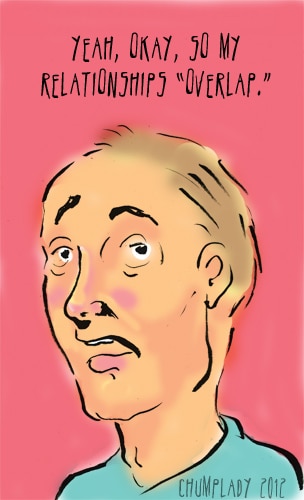 Today’s Universal Bullshit Translator fodder comes from SELF magazine. (Something narcissistically dunderheaded from a publication called SELF? No, you don’t say.) What To Do After Cheating In A Relationship.

So, you cheated. Maybe he was really hot, maybe she was really understanding of your workload, or maybe you were just really, really bored.

I always destroy innocent people when someone understands my workload.

The potential reasons behind cheating are legion, and afterwards, many people are at a complete loss about how to move forward in their primary relationships.

Because they are so entitled as to think they still HAVE a “primary relationship.”

Do you try to keep it a secret? Spill it all with the promise that you’ll never do it again? Or should you completely end the relationship instead? Here, experts explain the various options at hand after you cheat. The good news? An affair isn’t necessarily the harbinger of relationship death. Still, that doesn’t mean figuring out your next step is easy.

Hmmm… How to maintain cake?

First, do a self-assessment.

Before taking any action, think back to why you cheated, Jane Greer, Ph.D., a New York-based relationship expert and author of How Could You Do This to Me? Learning to Trust After Betrayal, tells SELF. There’s the obvious chance that you went outside the relationship because you weren’t getting what you needed sexually, she says. It could also come down to a chronic need to feel the excitement of something new, wanting to feel “alive” again, or merely that some people enjoy the risk of pursuing a so-called forbidden fruit.

“If the affair is the result of you feeling sexually or emotionally abandoned by your partner, then you may feel a degree of justification,” Gary Brown, Ph.D., a Los Angeles-based psychotherapist, tells SELF, although he notes that “even in very good relationships, you may feel that something is missing.”

It’s other people’s jobs to make you feel whole. If you feel like you’re missing something — fifty bucks, your cell phone charger, a roast beef sandwich — it’s okay to get those needs met by any means necessary! Pistol whip an old lady. She didn’t just hand that sandwich over? You may feel a degree of justification.

Additionally, Brown says it’s not just the “why” of cheating, but the “why now” that matters. “The timing of the cheating may say a great deal about [your] emotional state,” he says. You may not be able to put your finger on why you wanted to roam when you did, but it’s well worth thinking about.

Are you always a vapid narcissist? Or does it just come and go?

Sometimes it’s worth keeping your cheating close to your chest.

Although this view is controversial, it can be best to keep the whole thing to yourself. “Most people don’t tell their partner unless they get caught, and that’s a really personal decision,” says Greer. “You have to consider the nature of the cheating relationship you had.” She suggests deciding whether it will help you recommit to your partner and if you’re prepared to take on the burden of keeping the secret just so you don’t lose this person.

Consider the nature of the cheating relationship before you confess. Was it blow jobs in the parking lot with a co-worker? Keep it to yourself! Was it clandestine hookups with your best friend’s wife? Mums the word!

Keeping secrets is such a Burden. But hey, it  helps you recommit!

Recognize that if you’re acknowledging an otherwise undiscovered affair (especially one that’s ended), you’re creating emotional pain for your partner.

It’s honesty that creates pain. Not the fucking around you’re doing.

Although it may temporarily relieve you of some of the stress associated with keeping a secret, the tradeoff of your partner experiencing possibly permanent emotional damage may not be worth it, says Brown.

Keep being dishonest, it’s what your chump would want! I think you know best. Does that align with your self-interest too? Awesome!

One major caveat: if you put your partner’s health at risk by forgoing condoms or other similar contraceptives, it may be your duty to tell them. And remember that condoms don’t protect against all STIs, so using them with other people doesn’t guarantee that you’re truly keeping your partner safe. But not all cheating goes that far, so it depends on the situation.

If the evidence of an affair is irrefutable, you have to own up to it.

Naughty photos, dirty sexts, love letters over email? All of that is hard evidence. If your partner confronts you about it, trying to deny the truth is straight-up hurtful. “If you’ve been caught in a number of lies, you should really not try to cover it up if it’s clear there’s something going on,” says Greer. Instead, own up to it, and be prepared to apologize repeatedly.

Saying you’re sorry should cover it. If they get uppity, say, “HEY! I SAID I WAS SORRY!”

Yes, it’s definitely going to hurt your partner—that can be especially true if you’ve developed an emotional affair with someone like a colleague or classmate—but lying so you can hold onto them denies their agency in the situation. Also, the clear conscience doesn’t hurt, although that shouldn’t be your biggest concern.

Nah, a clear conscience should never be your biggest concern. Integrity schmegrity.

It may be even better if you can first discuss the situation in front of a neutral party like a therapist, says Brown, although that’s not always an option (unless you’re already regularly in therapy together). “This provides a measure of safety to help both people process the situation,” he says. Even if you confess in a spontaneous moment, scheduling an appointment with a couple’s therapist may help you both work out your feelings.

In either case, your partner may explode emotionally in the initial learning stages, and you’ll have to accept his or her emotions. The only thing that’s unacceptable? Violence of any kind, even in such an emotionally fraught situation.

Their potential for violence is completely unacceptable. Your unilaterally risking their health, mindfucking them, and destroying their trust? Hey! You were BORED.

And sometimes, you need to just end your relationship.

OMG NO! Sometimes cake dies? SOMETIMES? I thought I got to keep my primary relationship so long as I lived with the huge, colossal burden of my guilt? END CAKE?! Never!

The affair may signal that your relationship needs to end, whether you’d consciously like it to or not. Once an affair happens and has been disclosed, it forever changes the nature of your bond with your partner, says Brown. For example, it could cause your partner to be sexually withdrawn, says Greer, and that shouldn’t come as a surprise. “Their trust has been violated,” she adds. And sometimes, that violation of trust is too great of a chasm for a relationship to successfully cross.

Alternatively, even if you don’t tell your partner, cheating can make you realize you’re unhappy in your primary relationship. In that case, you should end it, but there’s not necessarily a reason to divulge your affair if it’s otherwise unknown.

And your happiness is what really matters here. If divulging an affair would kill your happy buzz, why do it?

The majority of affairs end at some point, and the price is quite often the primary relationship. (Although that’s not always the case. Brangelina, anyone?) So, if you’ve got wandering eyes, tread lightly so you can avoid making a hurtful decision. Even though it’s possible for a relationship to rebound after cheating, “recovery to the point of completely letting go isn’t going to happen,” says Brown. Now that’s some food for relationship thought.

Yes, the majority of affairs end at some point. That’s why it’s so important to keep a steady supply of potential fuck buddies. If one “primary” relationship ends (i.e., you get dumped), you can elect another!