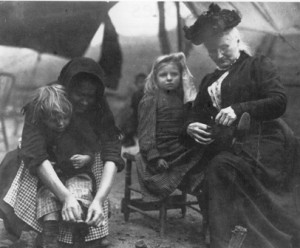 Today, in honor of Labor Day weekend, I’m rerunning this column about Mother Jones. Happy Labor Day and see you back on Tuesday! — Tracy

I’m struck by how often the catalyst for an extraordinary life is loss.

A friend of mine posts various nuggets of history on Facebook and the other day she featured Mother Jones. (Not the magazine that is named for her, but the labor organizer.)

Mary Harris Jones had a shit hand dealt to her if anyone ever did. Born in 1837, she became a school teacher, married a George Jones and together had a family of four children. Then as a young woman, she lost her entire family. Her husband and all of her babies perished in a yellow fever epidemic in Memphis. The children were all under the age of five.

That would be enough tragedy to send you to the mental ward for life, but Jones rebuilt and moved to Chicago to work as a dressmaker. By all accounts, she was quite successful at it. And then the Great Chicago Fire of 1871 hit and she lost everything. Again. Her home, her business, and all her worldly possessions.

Can you imagine? She reinvented again. In middle age! For the rest of her life (she lived to be 100), she was a fearsome labor organizer — called “the most dangerous woman in America.” What was she fighting for? To keep children out of coal mines and in school. Yeah, radical stuff. There were no child labor laws back in the day. The protections we enjoy today, we owe to protesters like Jones. I like this quote — she said: “I’m not a humanitarian, I’m a hell-raiser.”

In 1903, upset about the lax enforcement of the child labor laws in the Pennsylvania mines and silk mills, she organized a Children’s March from Philadelphia to the home of then president Theodore Roosevelt in New York.

The picture above is her outfitting children with shoes for that march. She was in her 60s by then — leading marches on foot, hundreds of miles. The children she marched with, many were missing fingers and limbs — maimed from factory work. She tried to get the president to give them an audience. Roosevelt was unmoved, but she never stopped fighting for workers’ rights.

“I am not afraid of the pen, or the scaffold, or the sword. I will tell the truth wherever I please.”

Take those words to heart, chumps. Loss can make you brave. When your world has been obliterated, it can provoke a fearlessness that is a gift. What can they throw at you that you haven’t survived worse? Could the pen, scaffold, or sword be worse than losing four children, a husband, and everything you ever worked for? They couldn’t touch her.

She could’ve let that loss kill her. Send her into mourning or the care of relatives for life. No one would’ve blamed her, it would’ve been the expected thing for a woman her age back then. But she did the unexpected thing — she became a fighter. She transmuted that pain into a courageous empathy that did some good in the world.

The futurist and inventor Buckminster Fuller once said: “You never change things by fighting the existing reality. To change something, build a new model that makes the existing model obsolete.”

I love that quote. I first saw it as a tag line in an email from an organic farmer. I think it appealed to her because she is part of a movement trying not to change industrial agriculture — but replace it with a new, sustainable, organic farming system, that bears no relation to the old order whatsoever.

My farm-y interests aside, I also think there is great wisdom in that quote for chumps. You do not change things by fighting the “existing reality.” If that reality is infidelity, you will not change it with the pick me dance, by trying harder, by chasing reconciliation unicorns. To change, you need to build a new model — YOU — that makes the existing model (chumpy OLD you) obsolete.

You need to invest in an entirely new reality. A BETTER reality (leave a cheater, gain a life). So often we “fight” instead — we butt up against the existing reality of being cheated on. We fight by trying to prove our worthiness, by obsessing over the affair partner, by staying locked in unhealthy ways of relating, by being the marriage police, when what we need to do is make our old crappy lives obsolete. It’s harder to mourn something, when you’ve got a better something to replace it with.

Did you know Buckminster Fuller was another one of those extraordinary people transformed by loss? If you’re not familiar with Fuller, he was a prolific inventor, architect and designer, who is best known for the geodesic dome. He was also a futurist and humanitarian, and a total odd ball. (He was expelled from Harvard twice: once for spending all his money partying with a vaudeville troupe.)

By age 32, Fuller was bankrupt and jobless, living in low-income public housing in Chicago, Illinois. In 1922, Fuller’s young daughter Alexandra died from complications from polio and spinal meningitis. Allegedly, he felt responsible and this caused him to drink frequently and to contemplate suicide for a while. He finally chose to embark on “an experiment, to find what a single individual [could] contribute to changing the world and benefiting all humanity.”

It’s a grandiose thought — to contribute your life in such a way to benefit “all humanity.” But then again, chumps — why the hell not? If labor marches and inventions aren’t your thing, find something that is. Invest in your better self. If you find your personal life destroyed by infidelity, yes, it’s tragic. It’s also an opportunity. Think of all the things you could be filling your new life with… making that past life obsolete. So what’s going to be next, chumps?

“Pray for the dead and fight like hell for the living.”  — Mother Jones

Previous article: Meh Sightings
Next article: Dear Chump Lady, I neglected him and this is all my fault