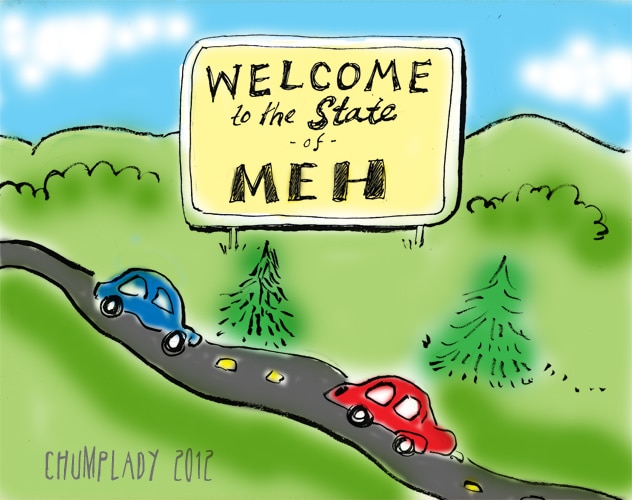 Have you had a glimpse of the Promised Land? Are you Meh?

“Meh” — that liberating place of acceptance — is where you no longer are consumed with cheater drama. You don’t love them. You don’t hate them. You sort of pity anyone within a five-mile radius of them, but their existence doesn’t rock yours anymore. You’re Meh. Whatever.

Meh doesn’t mean you’re okay with injustice, or having your boundaries trampled. It means that you’ve internalized “Trust That They Suck.” They SUCK. Not your job to fix them. You’ve got a life to gain — who’s got time for their crap?

So tell me — have you had any glimmers of Meh? Can you see it on the horizon? Are you firmly living within its borders?

If you’re new here, I know Meh sounds like Brigadoon. Oh yeah right. There’s really a mythical place ahead where I ACCEPT what happened and I don’t give a shit about the Fuckwit? He can erect a billboard to his Happiness, post a thousand schmoochy pictures of himself and Twinkie on social media and I won’t vomit on anyone’s shoes?

Yes! Meh exists! Today your assignment is to share your Meh. Describe it. What’s it taste like? How free do you feel?

Maybe you old timers could pick up a few chumpy hitchhikers on the road to Meh. Tell them what’s ahead. Happy Friday!

Previous article: UBT: “Respect my relationship with the OW”
Next article: Be a Hell Raiser, Not a Chump