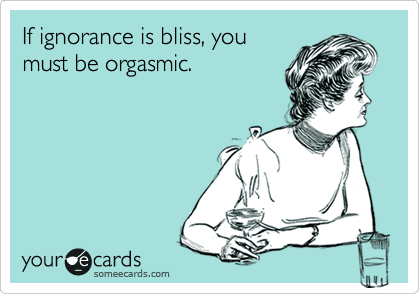 If you’ve ever had the misfortune of being chumped, you know that ignorance is not bliss.

Being kept in the dark about sexual (and most likely financial) betrayal is not happiness. It’s not business as usual. It’s not peaceful.

The only people who think ignorance is bliss are people who have never been chumped. And cheaters who have a vested interest in keeping their chumps in the dark.

That said, this ignorance about ignorance does not keep people from voicing an opinion about something they know fuck-all about.

If I were cheated on, I wouldn’t want to know.

You shouldn’t tell a chump they’re being cheated on because you’d ruin their life.

To wit, the otherwise irreproachable advice blog Captain Awkward gave this crap advice recently (and I’m sorry to say it, because I find Captain Awkward terrific). A person wrote in about her recently deceased aunt, who they discovered was having an affair with a guy we’ll call Mr. Creepy. Mr. Creepy showed up as chief mourner and wanted to go through the Aunt’s things. The letter writer thought Mr. Creepy’s wife should know about the affair.

The advice was given to destroy the evidence, ignore Mr. Creepy, and butt out of the chump’s business.

I know the Wrongness of all this is eating at you, but either his wife knows who she married and they are dealing with it between them, or she’s blissfully ignorant and you’ll be throwing a brick through the window of her life in the name of …feminism? You’d want to know in her shoes, but in her shoes, how much credit would you give a random account from a stranger?

I’d give a lot of credit to a “random stranger” who has tons of evidence on their deceased aunt’s computer, but alas, the random stranger has been told to destroy said evidence by an advice blogger.

But let’s examine the fallacies at the heart of this awful — but common — advice.

If someone told my husband, “I’m sorry to say it, but your wife has a really weird penchant for pinecone elves,” he would shrug or commiserate with the stranger about my eBay habits. If pinecone elves were threatening my marriage, and I promised to never buy another pinecone elf again, but secretly I HAD bought some irresistible limited-edition elves in floppy sombreros? This new evidence of my poor character is useful.

Fallacy #2. Ignorance Is Bliss. The un-chumped assume that those who are in marriages with cheaters are otherwise totally happy in those marriages. Sure, the cheater might be happy (CAKE!), but chumps? Yes, we are ignorant of the truth — but HAPPY? No fucking way.

For someone to be in an active affair means the chump is being emotionally abused. You can’t cheat on someone without lying to them or gaslighting them. Turning their suspicions back on them, making them constantly doubt their reality. Moreover, people who engage in affairs justify these affairs to themselves, and treat their partners and children like shit. You were so sexless, angry, ugly, consumed with the children, consumed with work that I had to cheat on you. That’s in the cheaters’ heads and in disparaging emails to their Schmoopies about the chump. At discovery? It’s said to chumps’ faces.

At the very LEAST, cheater are stealing time and resources from their families. To be chumped is to do the Humiliating Dance of Pick Me not even realizing who the competition is. It’s the sense that your partner is checked out, stressed, angry with you, finds you not measuring up quite, pre-occupied — and you don’t know WHY.

And that ignorance has real COSTS — years spent not knowing what the hell is wrong with your marriage (the cheater is checked out and is risking your health) — means you don’t get to move on with your life. It’s sunk costs. It’s financial decisions made in ignorance. It’s your reproductive health. It’s scary PAP smears.

Fallacy #3. The Truth Is a Brick. “You’ll be throwing a brick through the window of her life in the name of …feminism?” Sure, why the hell not? I’ll take a brick thrown for the cause of universal sisterhood. Heck, you can throw the brick in the name of the Flat Earth Society or the Fellowship of Donald Trump Appreciators. Who cares WHY the brick is thrown? What matters is that it gets lobbed through the self-serving window of cheater artifice.

I discovered I was a chump when the Other Woman told me. Were her motives pure? No. She wanted to break up my marriage and have Mr. Sparkles to herself. Did it hurt? Like a motherfucker. But it was the truth, and that knowledge ultimately saved me. The problem wasn’t the truth — the problem was that my then-husband was a lying, cheating con artist.

Until people start seeing infidelity for what it is — abuse — we’ll keep telling them to shut up and maintain the shameful silence. Frankly, I wish more people threw truth bricks. Is the truth shattering? Yeah. But the liberation is worth it.