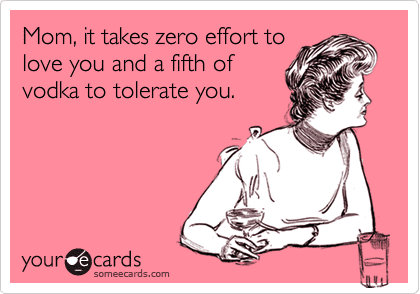 I am writing this letter after another deflating conversation with my mother in which she takes what small victories I can muster (today I put a deposit down on an apartment for myself and my 16 month old daughter) as I approach my divorce and crushes them, most likely unintentionally, but it still hurts.

Usually when I say something regarding the process of separation in a positive light, I get these snide comments such as “I guess” or “if that’s how you see it.” She says she understands my conclusions (my husband cheated for 5 of 6 years of our marriage sporadically with prostitutes — over the course of several moves and major life changes), but believes that I didn’t do enough (i.e. counseling) to try to save the marriage.

I did not go to counseling because after months of rolling this painful truth around in my head and heart, I decided counseling for the sake of saving this marriage wasn’t worth the money — I had made the conclusion that while I may be able to forgive him, I can’t stayed married to him. This might make my mom sound old fashioned or heartless, but I know she’s hurting for me too. Also, there are grey circumstances surrounding my soon to be ex’s actions (emotional stunting due to shitty oppressive father, passive-aggressive mother who said she was going to leave with the kids then changed her mind). By no means do I accept this as an excuse, but my parents grew to love his good side, which is what charmed and eventually blindsided me, and feel sorry for him.

To be fair, he is going to counseling, has stopped his bad behavior, and is trying to fix himself. Still, not going to accept what was done as okay or wait for the grand reveal of the new him. How do I make my mother see that what she’s saying is hurtful to me and counterproductive to what I’m trying to do for myself and my daughter? I became a SAHM when my daughter was born. In a matter of a month, I’ve managed to get a full-time job (which currently requires a long commute), daycare for my daughter (and battled all of the illness that accompanied that sudden change), listed the house, found an apartment — I’m exhausted! My mom has supported me in the past, but this is — hands down — the time I’ve needed it the most.

You are incredibly mighty. You’re parenting an infant child. You were dealt the blow of infidelity. You lawyered up, you didn’t pick me dance, you initiated a divorce, you listed a house, you got an apartment, you found a JOB, you found DAY CARE, and I’m quite convinced if I give you another couple weeks you’ll solve the Syrian refugee crisis. Please, from all of us here at Chump Nation, take a bow. You are kicking ass and taking names. You are AMAZING.

I’m sorry your mom sucks. You’ve tried to couch it for me in understanding spackle, hey, she loved him too. She was charmed. She’s not old-fashioned or heartless. Really she’s hurting for you too. She just shows it with utterances like “I guess” and suggestions that you didn’t try hard enough to save your marriage. Well, ChumpOnIt, I don’t have to like your mom. She’s not my mom. I think your mother sucks.

I get that she’s your mother and you love her and you’ll probably continue to love her after this crisis, but right now she is letting you down grievously. Maybe your mom doesn’t know what it’s like to find out her marriage is a lie. And that for FIVE of the SIX years you were married he was fucking prostitutes. And maybe she doesn’t know what’s it’s like to have her pregnancy imperiled by STDs. Or have the person you trusted most in the world look you square in the face for FIVE YEARS and lie to you. To go out, fuck a prostitute and then come home, crawl in bed and fuck you. Maybe she doesn’t know what it’s like to have your heart shatter into a million pieces, and get up to feed a crying baby anyway. Or then find a job. Or believe in yourself when you’re on your knees with grief.

Your mom was spared that. She doesn’t know.

But I can tell you, as a mother, she should have a damn good imagination. Like most mothers, I don’t have to experience calamity to imagine it for my child. Oh, I imagine my son dead in a ditch every time he doesn’t text me back. I worry every time he drives. My heart broke for him when he was 5 and Kate didn’t want to sit next to him on the school bus and he sobbed. I felt murderous the first time I heard a kid bullied him. And pretty much 24/7 I imagine all sorts of horrors and what I can do to shield him from them. (Should I send money? Place a phone call? Drive to Pennsylvania right now and get to the bottom of this?)

What I cannot imagine is shrugging and siding with the person who hurt my child.

I’m not talking gray zone here — like maybe my son was an asshole, or he back talked a teacher, and got detention. I’m not saying My Child Right Or Wrong — I’m saying how a mother feels when someone HURTS her CHILD DELIBERATELY.

As in steals her money, abuses her trust, breaks her heart, and fucks prostitutes.

THAT kind of hurt, ChumpOnIt, ought to bring out the mama grizzly. Where is her protective love for you? Where is her anger? How DARE YOU HURT ChumpOnIt like that! How DARE you disrespect her! AFTER ALL WE’VE DONE FOR YOU! After we let you into our family and our hearts? You PLAY US LIKE THAT?

And let’s not forget your father here either. Why aren’t both of your parents chasing this guy down the street with a threaded pipe?

but my parents grew to love his good side, which is what charmed and eventually blindsided me, and feel sorry for him.

Why do they feel sorry for HIM over YOU?

It’s not their job to feel sorry for him. I’m sure he’s got enough of that for himself, plus he’s got his own set of shitty parents.

So why are your parents failing you now? Some guesses.

ChumpOnIt, I can validate your anger and disappointment with your parents. What I cannot do is give you a new set of parents. I’d suggest you not look to them for support, but get on the forums here and find solace with the people in your life who DO get you. Let your parents help with logistics, like babysit their grandchild sometimes. But do NOT trust them with your broken heart.

When your parents fail you, the takeaway lesson is Don’t Be That Sort of Parent. Be the Mama Grizzly for your daughter. Be understanding. Be compassionate. And carry a threaded pipe.

Previous article: Nice versus Kind
Next article: Dear Chump Lady, My heart hasn’t caught up to my divorce