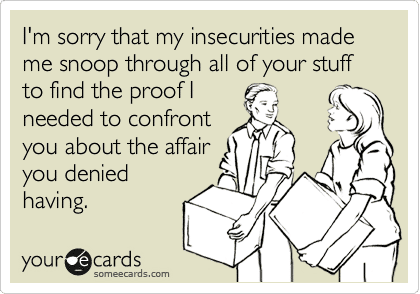 I recently had to research a story on the modern phenomena of losing your job because of something you posted on social media. Back in the pre-Internet era, when newspapers roamed the earth, and privacy was more or less a thing, you could be as offensive and shady as you wanted to be, and your employer would probably never know. Now, your employer can follow your feed and discover your penchant for pot-smoking,  racist tirades, or chia pudding recipes and fire you for it.

And (with some notable exceptions) it’s legal in the U.S. Totally legit! (In fact, the angle for the story I was writing was for lawyers. As in, “How can I fire my pot-smoking, pudding-loving racist? Must I reveal my sources?”)

Which got me to thinking — we live in a post-snooping world. Snooping used to be a bad thing. Unsporting! Don’t shake those Christmas presents! Don’t flip ahead of the book to see how it ends!

Now snooping is an accepted part of modern life. Heck, it’s even encouraged. Going on a date? Google him. Thinking of hiring her? Background check. Want to get to know him better? Stalk his Twitter feed.

The other day I got a letter from a chump who wanted to confront the fellow she was dating because he lied about his whereabouts. How’d she know? THE GPS TRACKING in his DATING APP told her so! I’m like — this is a THING?

Which brings me back to cheaters. They’re quickly losing the high ground on snooping outrage.

In a world with surveillance cameras, geo-locating, enabled cookies on your browser — cheaters, you’re going to get stroppy about your girlfriend checking your phone?

I’m not making an argument in favor of the Orwellian surveillance state (that drone has left the barn), I’m saying total strangers collect data on us every day. And it doesn’t worry most cheaters one bit. But your chump asks to see your phone? Oh hey, now you’re a born-again libertarian! Now you’re offended to your core at this violation of your privacy.

The common cheater play when busted, is the false equivalency. Fucking escorts and risking your health? No, the greater sin is you looked at an incoming text. Your wife had a year-long affair and is conspiring to run off to another state with your children? You discovered this by hacking into her email. YOU SIR are a MONSTER!

The whole It’s Not What I Did, It’s How You Discovered It is getting increasingly lame. Did I discover your affair? Oh yes, and while I was at it, I discovered the four speeding tickets you had in the last 20 years, the Facebook page of your third grade teacher, and your long-lost half sister. Then, your boss called and fired you for being a pot-smoking, pudding-loving racist.

If employers can snoop to fire a fuckwit, chumps can too.

It’s getting harder to hide your shadiness. In this new world, if you have a few human blemishes, get in front of them and expect that youthful larceny charge to be found. And while I prefer trust over surveillance, it appears the new order is surveillance over trust.

Not a good place to be if you’ve got something to hide. Grip your cell phones a little tighter, cheaters, and smile for the camera.