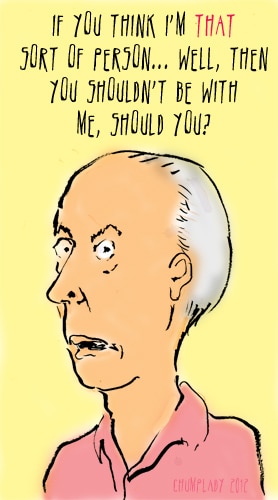 What do you do when they will NEVER admit to the truth? Even after you have hired a Private Investigator who traced him to two different hotel rooms in one week with the affair partner?

He claims she slept on the couch. Sure, because that’s what adults who have been having inappropriate contact for months do. Let me back up. I was 8 months pregnant, had literally just moved into a new house in a new city (he had been there for a few months prior at his new job that forced the move). I started getting feelings that something was going on. I started catching him in lies about where he was and who he was talking to. He became a ghost in our house — he was never around me and our two small children. When he was home, he was on his phone or his computer.

Then I checked his phone records online when he was out of town and discovered the 1000 text messages and 700 voice minutes between the two of them for the month of December alone. Did I mention they work together? He was talking to her every night on the way home from work, when I was with my kids at soccer practice or dance, and one time they talked for an hour and a half while he was out of town at 11:00 p.m. And those are just the highlights.

I confronted him and he managed to talk his way out of it, actually making me think I was crazy for even thinking anything was up between them. He swore he would stop all contact with her (even though there was nothing going on. They were “friends” and she was “really cool” and I would “really like her”). Then two days later I caught him in a lie . He had taken her to lunch ALONE, but I was “over-reacting.”  A client had canceled and he didn’t want to be a “dick to her.” So instead he was a dick to me and betrayed me again.

Then I went into labor and basically had to beg him to stay at the hospital with me. Then I had to be re-admitted with serious complications from the epidural and had to beg him again to even visit me. So this goes on and on, I catch him in even more lies and he continues to convince me I am crazy. Did I mention I had a two-week old infant at this point? And no friends or family? And two other small children?

His response is that I want him to “admit to something he didn’t do” and that “I did nothing wrong.” It is infuriating to me. I filed a month and a half ago so this is still a pretty fresh wound, but I feel like I will never get closure and never be able to get to “meh” without him admitting to what he has done. He continues to tell me I rushed to file, I “quit on my family” (my personal favorite), I never loved him, etc. But no remorse, no inkling of admitting anything. I can’t believe someone would hold on so tightly to a lie and allow it to destroy his life and his children’s lives. How can I move past this and accept that he will never admit it?

Thanks — your blog has literally got me through many, many rough times in the last month!

Let go. I hate it when people tell chumps to let go (as in “stop being bitter! let go!”), but seriously — LET GO. This guy is a disordered wing nut of the highest order. You got a PI to trail him THREE TIMES and BUSTED him every time. This is like that Richard Pryor skit — “Who ya gonna believe? Me or your lying eyes?”

Believe your lying eyes, Crista. Don’t let him deny your reality. He can say any fool thing he wants to say, you KNOW the truth and you’re acting on that truth. His denial is just a play for control. Frankly, it’s another effort to control you and abuse you. (Because, yeah, cheating on your pregnant wife isn’t abuse enough). He is projecting his sins on you — “quitting on the family,” which is a heinous mindfuck. He desperately wants it to stick. It would be so much nicer if you would just accept the mantle of Very Bad Person Whose Fault This Is, otherwise he’s going to have to create that narrative anyway without your help. But it’s a much more convincing act if you’re in on it too.

What? You don’t want to be party to your own abuse? The nerve!

He is a sick motherfucker. To preserve your sanity, you need to go absolutely no contact with him. All communication must be about kids and finances and done solely through email so it is documented. You give all the PI info to your attorney and let them make hay with it. And you don’t engage with him. He’s a crazy person. Imagine a tinfoil hat. He is a raving lunatic in a tinfoil hat talking crazy talk. Of COURSE he was having an affair and OF COURSE he is guilty as hell. You are NOT the crazy person here, HE IS.

You know how you stop needing to be right about this? Believe yourself. Trust that he sucks. Know that your truth is ENOUGH. Quit looking to him for validation, because he’s not going to give it to you. He wears a tinfoil hat. Do you ask your local homeless schizophrenic for a reality check? No. You do not.

You’re going to get to “meh” when you really internalize who he IS — which is a cheating scum bag who was screwing around on his pregnant wife and the mother of (now) three small children. He’s that guy. A guy who wants to subjugate you and abuse you. That’s the truth. And just like he cannot control your narrative (sing like a bird, Crista! Sing!) — you cannot control his.

Let go of the need for him to “get it.” He is very invested in not getting it. Prepare yourself that he will try and smear you and deny the truth. Don’t let that bother you. You keep telling the truth if people ask “I got a PI and discovered he was cheating on me, repeatedly.” Once he recedes from your life — and he will — have faith he’s going to recede — the need for him to admit it will grow less and less and less.

I used to be hung up on wanting my ex to be sorry. Oh, he was “sorry” all right. He’d say anything. What a stupid waste of my heart. I needed to realize then, as you need to realize now, that the truth is situational to these freaks. Your ex would say ANYTHING. What’s going to happen if he admits it? Yes, Crista, you busted me. I’ve been fucking that other woman. Do you think he’s going to follow that up with apologies and mean it? He doesn’t mean it. His actions tell you everything you need to know about exactly how sorry he is — when confronted about his cheating, he KEPT CHEATING. When you were in a hospital having HIS child, you had to beg him to be there. When you were sick and alone in a new city with small children he abandoned you.

There — that’s your sorry.

Closure doesn’t exist. At least not in the sense that you have some Great Reckoning with your cheater and they explain why they did it and finally it all makes sense, and then rainbows appear, and the clouds part and a ray of sunshine comes down and bathes you in a heavenly glow.

No. You give yourself closure. You keep believing your senses and listening to your gut. You give it time. You’re kind to yourself. You surround yourself with people who believe the truth about him and hold you up. He’s a bad man. Life is going to be much better without him. I know it’s scary, especially with three little kids, but you just get the best damn settlement off him you can get, and you go build that awesome life without him. Because Crista, life is so much better without him. He is an abuser and a mindfuck.

I wish I could sprinkle some magic chump dust on you and give you closure. Actually, I wish I had my own personal cousin in the mafia to go knock his head in. But I don’t have either of these things. You’re going to have to take my word for it that “meh” is out there. Keep moving toward it and don’t look back at him. Forward march, Crista. You filed — good for you!  You are mighty! — keep going!!

This column ran previously. And I don’t know what happened to Crista. Good things I hope.

Previous article: I Haven’t Been Happy for a Long Time
Next article: When the Pick Me Dance Turns Deadly