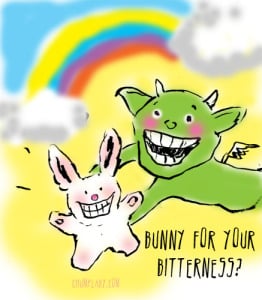 If you’re a woman, you’ve probably had a stranger tell you to smile. I remember the first time it happened to me, I was 19 years old and walking to class at the London School of Economics. Lost in thought, probably thinking about Kant or something pretentiously liberal-arts-ish. A construction worker told me to smile. I was totally startled, and baffled more than offended. Was I looking particularly pissed off? OMG, am I walking around with a scowl and this kind stranger is doing me a favor pointing it out to me? These are the chumpy thoughts of a clueless 19-year-old.

Most recently the Smile Diktat happened to me at an HEB in Texas. I was standing in the checkout aisle and a toothless man told me to “show dem pretty teeth!” and smile. I was 49 and on to this shit. I just looked at him and gave the non sequitur, “Thanks, I’m good.” Turned my back and proceeded to deal with my groceries.

I was reminded of the Smile Diktat reading a thread criticizing this site that a chump sent me. Why would anyone recommend CL when it’s so negative? And the comments are full of bitter, angry, sad people? Why is it not more positive about reconciliation? Why is CL so full of vitriol? Is it for the riches of online advertising? And then it devolved, as infidelity discussions often do, into a discourse on how Sexless Marriage Is a Valid Reason for Cheating.

The whole thing made me wonder what the premise was. I’m sorry, was I doing infidelity WRONG? Have I failed to be more positive about the experience? (Answer: I’m keeping you all locked in “victimhood.”) Did I forget to smile?

If I screwed up something as simple as walking to school or buying groceries without the required amount of pleasantness, how could I possibly hope to be upbeat about cheating? What’s the answer here? Write a bestseller like, “My Husband’s Affair Became the Best Thing That Ever Happened to Me” by Anne Bercht? Turn that frown upside down!

Why can’t people be upset and angry about being cheated on? It seems totally congruent to me. Spackling it as the Best Thing EVER since Disney World and vibrators seems utterly nuts… but hey, don’t listen to me, I’m bitter.

The whole thing makes me feel rather flinchy and defensive. Not unlike when I’m ordered to smile — HEY I SMILE A LOT, JUST NOT AT YOU, BUDDY. Similarly, I am full of the warmth of human kindness, dude. I ask people how they’re mighty! I encourage single parents! I tell people to believe in their own potential! Fuck YEAH I smile!

(Points off because I said “fuck” though.)

To the critics (who can suck it):

1.) Anger is a stage, it’s fuel to get away. Chumps have a hard time with anger. We’re more prone to love all the hurt away at our own peril. It’s okay to be angry. It’s a natural response to being transgressed upon.

2.) No one is promoting “victimhood” here. You know who promotes victimhood? Sad sausage cheaters. People who blame their “sexless marriages” for their cheating. Jerks who can’t own their choices and have to blame chumps. We’re all about the MIGHTY here at CN and losing the losers.

3.) I’m sorry changing the narrative is upsetting to you. You should smile more.

So, CN, your Friday challenge is to fill the comments with sunshine, lollipops, and middle fingers. Or whatever your angry, bitter little hearts desire. It’s all clicks to me, and I’m just going to go roll around like Scrooge McDuck in my dollar piles now.

Previous article: When the Pick Me Dance Turns Deadly
Next article: Dear Chump Lady, I’m too old to start over