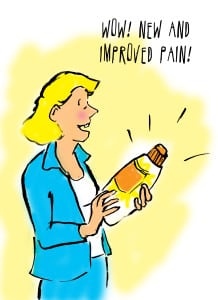 When the Reconciliation Industrial Complex describes infidelity, it invariably minimizes the experience as a “mistake” or worse — a magical path of cheater self-discovery (a la Esther Perel’s “exuberant acts of defiance.”) In any case, monogamy isn’t natural and you’d best stop your sniveling and ask yourself what you did to be so unlovable. While glossing over the traumatic nature of being chumped, the RIC tends to leave out the details.

Sure, there was cheater flirting, sex, and naughty thrill-seeking. Left out? Missing money, pregnancy scares, STDs… I could go on. (This blog goes on… closing in on 20 million now…)

Of course, as chumps, we didn’t KNOW about the cheating, until we did. My “fun” Friday question for you is — what ELSE didn’t you know about? Exactly how in the dark were you?

Now, I might be an extreme case of chumpdom, but I think a lot of you could go head-to-head with me for the chump crown. My point is, where there is one lie (JUST A FRIEND), there tends to be a lot of other lies too. I’m sure I don’t know the half of them.

So let’s debunk the narrative that affairs are a couple of splendid, ethical people whose hearts want what they want. Aside from the clandestine fuckbuddy(s), what else didn’t you know about?

(And remember — a clandestine fuckbuddy is ENOUGH to trust that they suck. This is not encouragement to pain shop or engage in further discovery missions. Details usually come to light later. People who betray you are not known for their unvarnished honesty and full disclosure.)

Every time you support Chump Nation on Patreon, a kibble dispenser gets jammed.

Previous article: Gwyneth Paltrow Can Bite Me
Next article: Stupid Shit That People Say to Chumps