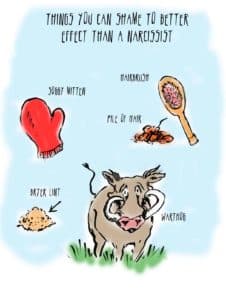 Stabby asked a good rhetorical question this week about her cheating ex who was blatantly appropriating her work — WHERE IS THE SHAME?!

So many fuckwits, so little shame! To the Reconciliation Industrial Complex selling vulnerable people affair-proof-your-marriage snake oil? WHERE IS YOUR SHAME? (Heck, where is the Better Business Bureau?)

Now, Dr. George Simon, friend of the blog, has a lot to say about shame — namely that it doesn’t work on fuckwits (putting it in laymen’s terms). But it works terrifically well on chumps. Appeal to our sense of shame? Call us selfish? Insinuate that we’re quitters? By golly we’ll work THAT MUCH HARDER! If you want to manipulate someone, you need a conscience to provoke. Little to no conscience? Not much shame.

So your Fun Friday Challenge is to tell CN where their shame is. Did it run off with a hooker? Get itself stuck in a ditch? Ascend to Jesus? Where is it exactly? Have you had any sightings?

Every time you support Chump Nation on Patreon, the narrative shifts just a wee bit more.