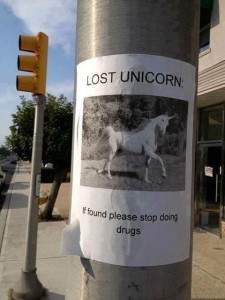 I potentially have that mythical unicorn in my life. It shares its body with the original transformer that sadly still becomes my spouse on occasion.

In the morning light with dew on the grass, the unicorn seems legit. Doing and saying the right things. Making good changes and taking responsibility for his choices. Going to counseling on his own, developing better relationships with all. When he sees me in pain, he knows that he is the sole reason I cry. Got the truth after a couple weeks of gaslighting/denial, not willingly but eventually admitted / shared details nonetheless. He has agreed to all boundaries and for the most part I do believe he is heading down the path of a better life, with or without me.

However, I see remnants of the transformer’s personality in his underlying choices.

For instance, I requested that he acknowledge a few hard days I have most every month. Instead of doing as I ask, he chooses (for my benefit) to NOT say anything on those hard days; he identifies that he believes that he is protecting me from pain on those “special” days and he chooses to ignore them because we are moving forward. I called him on his bullshit but truthfully his thinking/decision making is so skewed that he talks himself into believing that line.

For instance, we finally told our college age kids the truth (for over a year they had been rebuilding a relationship with their dad based on his BIG LIE that he only sexted her when in reality they had multiple sex overnights and were just getting started with their affair because they both deserved some happiness). He was upset, not because of what the truth would do to his kids, but upset that he should have been given adequate time to prepare how to tell his kids.

For instance, this past month, I brought up divorce. 95% of the time, he appears to want to continue the marriage and actually does “think” of me when making some choices. However, his yearly vacation with a relative became a priority and a reality over this last holiday weekend of the summer. He “asked” me if he could go. I told him it was not my decision to make. When he made the commitment to go, I told him that I was floored that he made the choice he did with the marriage hanging on a thread. Instead of the obvious truth (that he really wanted to go), he again talks himself into another bullshit story about the other person’s happiness with the annual trip and also that I probably needed a break.

The first question I asked the marriage counselor over a year ago was whether or not he was possible of true change, not just the surface rust changes, but the soul busting changes that govern underlying choice process. I have stuck it out for a while to see what changes he was capable of making. Divorce is now an option to explore given the rare but continued surfacing of the old husband.

The unicorn that I am married to reverts to a transformer when pending decisions require him to make a difficult choice.

Looking for your input. I actually do see the real remorse (not just the genuine imitation naugahyde remorse); however the default transformer just will not allow the permanent conversion to the unicorn. Don’t think that will change.

Honestly, maybe it boils down to how the affair has changed me: weary, untrusting, doubtful and just plain disappointed. Maybe I don’t believe in unicorns anymore.

Thanks for your column. It provides an angle of sanity to turn toward instead of the daily stupidity.

I’m confused, CLL. You say your husband is “making good changes and taking responsibility for his choices” and then give me chapter and verse on how he’s not doing that.

He doesn’t comfort you when you have a bad day — and does the mindfuck that it’s really for YOUR benefit. He takes a trip alone with a “relative” (you sure about that?) — and says it’s really for that relative’s benefit, and you “needed” a break. And he attributes his inability to tell his kids that he had an affair to… inadequate preparation. I mean, maybe he had a flip chart and PowerPoint, CLL, and you were just too hasty!

It seems to me, when pressed into an uncomfortable situation, he reverts to mindfuckery and probably gaslighting (a trip with family? Really? Why aren’t you invited?) Yeah, I wouldn’t be very trusting either, CLL. What exactly has he done other than go to counseling by himself? Do you have a post-nup?

I only have a letter to go on, but it looks like you both have issues saying what the hell you want. When he asked if he could go on that trip – yes, I would object to the whole parent/child dynamic, but you should’ve said exactly how you feel about that. HELL NO I DON’T WANT YOU TO GO ON THAT TRIP. Instead you say it’s his choice, and then get pissed when he chooses.

You’ve stepped into the mindfuck bear trap. Because he posed the question as a Mother May I kind of thing (grrrr), you’re quick to back off to not be seen as controlling or parent-like. I Trust Your Best Judgment on This. When of course you trust no such thing. He, naturally, does what he wanted to do in the first place. And the no win is, if you object, you’re the bad guy, and if you consent, you’ve fucked yourself.

Instead, take a step back and stop focusing on him and his purported motivations. “..Truthfully his thinking/decision making is so skewed that he talks himself into believing that line.” Do you want to have to take his temperature each day on how much he wants the marriage? Oh, today he’s 95% in!

Why not ask yourself — is this relationship acceptable to ME?

Do you want to play marriage police? Do you like that parent/child shit? Do you want a marriage where every time he fucks up he says really it’s for Your Benefit?

My take is the guy is a spineless, manipulative dude. He’s very quick to cloak himself in righteousness at your expense. Hey! He’s just misunderstood! Why can’t you appreciate him and how much he does for you! Like giving you a BREAK by taking holidays with other people! He’s really a Very Nice Person whose only fault is how much he considers others. And there you go, picking him apart, like nothing is good enough. He doesn’t comfort you when you’re sad because you’re ruining that whole “moving forward” thing. It’s for your own good. If you could just suck it up, we could all get past it, but you there with those emotional days. He was only thinking of your happiness when he was ignoring you.

Are my only choices to see this guy as a unicorn or a transformer? I just see him as a cheater. An unreformed one.

Figure out what you want, CLL, what you stand for. Is this enough “sorry” for you? (((Big hugs)))