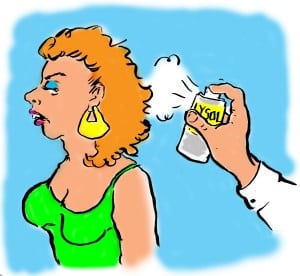 OptionNoMore suggested a column the other day — share the time you stood tall after having to face your ex or Schmoopie 5.0 at an event.

Then, Mr. CL offered this twisted suggestion — or share the time you failed miserably at this.

I know the interwebz are full of listicles on how to Clairvoyantly Uncouple for The Children. (Sticking jade eggs where the sun doesn’t shine?) But they never include the kind of advice you really need. Like a mantra of positivity so you’ll forget that time he fucked hookers while you were 7 months pregnant.

(This may be why no one puts me in charge of magazine listicles.)

We all know how hard it is to brighten up when the turd arrives in the punchbowl. For anyone who has 14 years of child exchanges ahead of you, please be assured that meh is real. You CAN rewire all those neural networks to yawn at their idiocy instead of cowering in a corner away from it. But it takes time — and really, who wants to do this work? To get over phobias, you’re supposed to expose yourself to them. Touch a spider, drive over a bridge, ride in the airplane.

Great. Now what if that spider BIT you, the bridge collapsed, and the airplane crashed into a ball of flames. Would you want to go anywhere NEAR that shit?

But chumps, this is what we’re called upon to do — gain a life. Triumph over fuckwits. Ascribe them non-meaning. Feed no kibbles.

Previous article: How Do I Fix My Picker?
Next article: Dear Chump Lady, Am I normal?