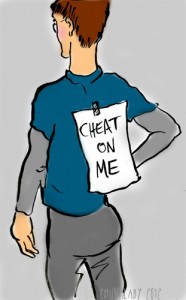 My name is Tracy, I’m a chump, and I’ve been spackle-free for ten years.

It’s a struggle, of course. Some woman from the local charitable sorority will press me into service for the garden tour and it’s a battle to say no.

I’ll think, “I just did two straight years of graphic design for you people! The historic home tour? Hello? ‘Hey, can you type this up?’ and it’s written on a cocktail napkin and I have to google the addresses, oh, and can I take some pictures? And could we have 200 copies, and you don’t mind fronting the printing costs, do you? And I do ALL THAT, plus posters, and street signs, and 5 months later you’re after me for garden tour brochures? There are 40 people in this organization, doesn’t one of them use a computer?!”

Answer — no. They’re all over 70. And hey, it’s so much nicer when you do it. We do tell you how NICE they look! Bless your heart.

Chumpy me thinks… don’t be churlish. It’s for literacy. Say yes. You don’t want to disappoint these good people. Healthy Tracy thinks, I have contributed. It’s okay to say no. Write a check.

So I say “no” — and yep, I feel bad. But I’m not spending the next month doing InDesign for seniors who don’t know what a PDF is either.

Yes, I still struggle with being a chump. I have a Vitamin N deficiency.

This term was introduced to me by an older mom friend who said all kids need “a good dose of Vitamin N.”

Some people have a hard time setting boundaries and saying NO. (Chumps.) And some people never get Vitamin N, or reject it, and live in entitlement.

I own that I’m a people pleaser, and I’ve had to work on my issues of seeking value by what I offer other people. The pleasant side of that is you can count on me to give you a ride to the airport. The uglier side of that is I tend to over estimate my powers. I WILL MAKE YOU LOVE ME! I can control any bad outcome if I just WORK HARDER! I accept responsibility for things I shouldn’t. And I resent it when people don’t notice my “kindness.”

These faults directed at a garden tour brochure are pretty benign.

These faults directed at a cheater are really toxic. They kept me stuck.

One misconception people have about this site is that I don’t blame chumps. Well, in a certain sense you are right — I absolutely do not blame chumps for being cheated on. We’re good people, we have a hard time conceiving that anyone would do us so wrong because we see the world through our own moral lens. Of COURSE we’re shocked by infidelity. Of COURSE we’re gutted. We were totally committed. That’s how we roll. We love with our whole hearts.

But dear God, people, that doesn’t mean you don’t have shit to own — you’re a CHUMP. I’m a chump — that’s why I named this place “CHUMP Lady” — it’s everything I learned about infidelity and myself in about 1500 articles of brain dump. Some people are manipulative pieces of shit, and they’re good — but we need to be better.

That doesn’t mean you drove your cheater to cheat. There is so much of that crap out there, so much blameshifting from society and from cheaters that we chumps get defensive. Don’t you DARE insinuate that I made this person cheat on me!

That shit pisses me off too. We did NOT make them cheat on us. But we are 100% responsible for how we go forward. THAT is on us.

I know why I did those things. I know what my fears were, and my FOO issues, and why I did the pick me cha cha as long as I did it. Doesn’t make it any less chumpy. What he did was WRONG. Horrible, cruel, abusive. But I stuck around in reconcilliation for a year of that shit after he showed me who he really was, and that’s on me.

The important thing is that I figured it out eventually, and I forgive myself, and today I try not to be such a sucker. I preserve the nicer parts of my chumpy tendencies (rides to the the airport), but stifle the uglier side (trying to control things I can’t control).

It’s so easy to lose yourself in the cheater. As the saying goes, the villain gets all the best lines. Bad guys are so compelling. What makes them tick, why they did what they did, how much it hurt us, how unjust the whole clusterfuck is. Going through the skein untangling is inevitable in the beginning — but don’t get stuck there. Because you’re never going to understand or control that wing nut. You only control you. So ask yourself — why did I accept this crap? What am I afraid of? What are MY values and am I honoring myself and living my life authentically now?

Cheaters are going to spin, try to pin their crap on you. People will gossip or second guess you. It’s hard not to get defensive and correct their lies and assumptions. All you can do is speak your truth and live your values. Let go of what you don’t control.

I think it’s totally okay, necessary even, to react to blameshifting with anger. How dare you try and pin this shit on ME! But don’t let that stop you from self-examination. You don’t have to justify yourself to the cheaters and the rubberneckers in your life. But you do need to answer to yourself. Who WAS I in that relationship? How did it get to this point? Why didn’t I enforce my boundaries or know that it was okay even to have boundaries? How can I honor myself going forward?

Because unless we examine our issues, we’ll be chumps for life. And that’s a shame, because being a chump is such a treatable condition. We just have to know our worth and assert it when people trample our boundaries.

I suppose being a chump wouldn’t be such a bad thing if the world were comprised solely of fellow chumps. My chumpy tendencies are muted paired with my husband’s chumpy tendencies. Okay, delightful even when we’re both trying to out-please the other. If he resents the fact that I do not sufficiently appreciate his French toast (I don’t like French toast), the world isn’t going to end.

But the world isn’t just full of chumps — it’s full of bad guys who will play you. And even more full of people who just Need Things Done and will sniff out your chumpiness and use you. So say NO to the garden tour brochures, people! It doesn’t take everybody to be your friend. Know your worth and let people earn your gifts — don’t be quite so free to give of yourself unquestioningly.

The first step is owning that you were one.

This column ran previously, and I’m still working on that book club thing, however I have conquered the garden brochures.