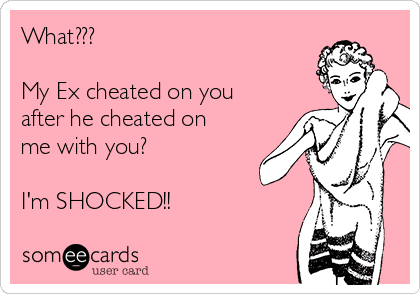 So here’s some good news — a new study came out vindicating chumps everywhere.

And karma bonus — the Other Woman who “won” the cheater?  They turn out to be the losers.

The study, led by Dr Craig Morris, an evolutionary biologist at Binghamton University in New York in conjunction with University College London, explored the experience of 5,705 women in 96 countries — and is the largest study ever on relationship dissolution.

Our thesis is that the woman who “loses” her mate to another woman will go through a period of post-relationship grief and betrayal, but come out of the experience with higher mating intelligence that allows her to better detect cues in future mates that may indicate low mate value.

‘Hence, in the long-term, she “wins”. The “other woman”, conversely, is now in a relationship with a partner who has a demonstrated history of deception and, likely, infidelity.

The study, published in the Oxford Handbook of Women and Competition, also explored the dynamics of the pick-me dance and concluded that it sucked.

‘Typically psychological and relational in nature, this competition may be no less damaging than physical violence more commonly used between males.”

Rerunning this column, because hey RIC — where’s YOUR science? And also I was up late last night recording a podcast — interviewing Mr. CL on all his How to Survive Court tips (he’s a trial lawyer). How to be deposed, what to wear (no flip flops!), how to keep your cool, why that matters, what NOT to do… and it was all professionally recorded at Arlington Independent Media, which if you live in the D.C. area, you should totally check out. The podcast is going up on the Patreon site as soon as the editing is done by the sound magicians there at AIM. Yea!

Previous article: Dear Chump Lady, Did my being controlling make him gay?
Next article: What It Looked Like, What It Was