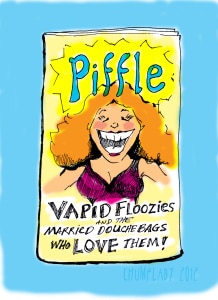 Stephen Colbert coined the awesome word “truthiness” — when referring to politicians who spin their own versions of reality. They seem so sure of themselves, who cares if it’s not the truth? It’s truthy!

Similarly, the food writer Michael Pollan in his book “In Defense of Food” distinguishes between actual food (things “your great-grandmother would recognize as food”) and “food-like substances” such as Hot Pockets, go-gurts, and most public school cafeteria lunches. It’s sort of like food. Heck, it might contain actual bits of real food — but it’s not truly food. Pollan fears we’re losing our ability to distinguish and prefer the fake over the authentic.

I think quite a few people exist in this alternate universe of truthiness and food-like substances. They’re sort of real, but they aren’t really. They look good, but they taste like sawdust. They say the right things — and gosh, they seem totally convincing — but they don’t really mean a word of it. Or they meant it when they said it, but then they walked outside and got distracted by a butterfly and forgot whatever it was they were convinced of a moment ago.

This is the phenomenon of “situational truth.”

From a recent letter:

I thought he meant it when he said he wanted to grow old with me. Well even when all this happened, he said he DID mean it at the time. He just knew that might change.

So did he change his mind and forget to tell her? Did he say it because it sounded noble and romantic? Did he have his fingers crossed behind his back? Or was he simply keeping his options open, and shame on her for taking him at his word?

I think we all understand what it is to change your mind. To regretfully renege on a former commitment — “I’m sorry, I know I agreed to bonsai pruning on Thursday night but I forgot I have a PTA meeting.” Situational truth isn’t changing your mind — it’s changing your truth. Instead of reality being a constant, for the “truthy”, the truth is fluid. It can adapt to your ever-changing whims and desires.

Look Suzy was all very fine and great so long as she had cookies. And she might have cookies again, and when that happens, I’m sure Suzy and I will patch things up. Did I believe what I said when I told Suzy she was my best friend? Well, sort of. My vision of a best friend is someone who not only has cookies in their lunch, they give me cookies. So yes, Suzy was absolutely my best friend in that moment. But then she just wasn’t that useful to me after I ate the cookies. I could wait around until tomorrow, when chances are Suzy’s mom might pack more cookies in her lunch — but that proposition is iffy. Right now Robert has cookies! — so best friend allegiances must shift.

We chumps get so hung up on veracity. To us, when you tell someone they are your best friend, you mean it. It takes a lot more than fresh cookies to rock our commitment. We internalize the things we say. We hold Suzy in our hearts. If anyone asks, Suzy is our best friend. We actually invite Suzy to our birthday parties. She is so much more than her cookies.

For the truthy, all truth is situational truth. It’s not a constellation based on the North Star, where the moral compass turns to an affixed point. No, instead the truth is an Australian shepherd puppy. You have a treat for me?! Awesome! Oh, hang on — SQUIRREL! Whoa… OMG! squeaky toy!!! Where were we?

Okay, perhaps that’s not the best analogy because Australian shepherd puppies are not malevolent, they’re just dim-witted. The best practitioners of situational truth are the personality disordered — they manipulate as easily as they breathe. They don’t agree with your version of reality because it’s yours, and withholding consensus on reality fucks with your head. Bonus!

So if you find yourself in the company of one of these wingnuts? Hold on to your cookies, chumps. And don’t invite them to your birthday party.

This column ran previously, as I’m slowing waking up from a long day of travel yesterday from northern Michigan. Where are the blue skies and fish spread? (sad face)

Previous article: UBT: ‘Our Marriage Was Already Over’
Next article: Dear Chump Lady, I don’t have any good memories of him