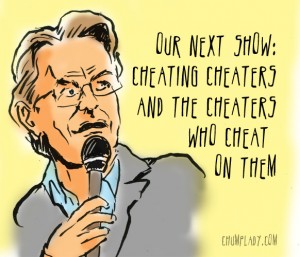 Thank you for supporting so many betrayed people. I’m 1 month from D-day.

Perhaps you could expound on the potential for betrayal and recovery to be the best thing that’s ever happened to us? How would it work? How long would it take? What are the roadblocks? In my opinion, it fits right in with your message to leave a cheater and gain a life.

The short answer is no. Betrayal is not the best thing that ever happened to me. I prefer to call a thing a thing — it sucked.

Frankly, that span of insanity was the most traumatic of my life and I’m surprised I didn’t wind up in the bottom of a well somewhere. As improving experiences go, I’d put it up there with that time my friend Ed blew his brains out and left me all his tools. Shock. Horror. Sobbing in awkward places. But infidelity was worse. With Ed at least I got a reciprocating saw.

(Of course the obvious difference is that Ed was a good person who meant me no harm. And my ex was a sociopath who did.)

Anyway. Trauma. I don’t recommend it.

A founding text of the Reconciliation Industrial Complex is Anne Bercht’s book: My Husband’s Affair Became the Best Thing That Ever Happened to Me.

Which I have subtitled: “And Shooting Off My Kneecaps Has Improved My Tennis Game.”

It’s patently absurd, but our takeaway is supposed to be that her husband’s affair made their marriage stronger. Had it not been for his wandering dick, she’d never have known the bliss her marriage could be, and has become.

I debunk the RIC everywhere on this blog, so I won’t digress on the dryer lint that is Bercht’s moral reasoning. (But if you need a moment to vomit, go right ahead.)

Chump Lady is not the flip side of that nonsense. Nowhere here do I argue that what happened is okay or improving. Being Chumped Is the Best Thing That Ever Happened to Me!

Let’s not confuse resilience with injury. I’m totally for resilience. And I’m not dressing an injury up as anything other than an injury.

Why am I splitting hairs about this? (Or chopping kneecaps with my reciprocating saw?)

Because it matters what we tell ourselves.

To make the first RIC argument is like saying, “Oh hey, slavery was the Best Thing That Ever Happened to African Americans, because we got jazz!”

The fact that African Americans were able to create a unique American musical legacy in a country that enslaved them for hundreds of years is a testimony to their God-Almighty RESILIENCE in the face of oppression.

I’ll be goddamned if I’m going to tell people to thank their oppressors for their resilience.

And isn’t that what your ex wants? To lean over the table some day and say “Leaving you for Dylan was All For The Best! I’m not a terrible person, I was just a catalyst to us Both Finding Happiness.”

“I’m going to make this the best thing that ever happened to me.”

I interpret that statement as — I refuse to let the motherfuckers keep me down.

And that’s what I encourage you to do. Choose how you will respond. Create your best life IN SPITE OF the injury. Because that’s what we control — ourselves.

How long does it take? It takes as long as the motherfuckers try to keep you down. It’s a long fight. Go make a joyful noise in spite of it. Make new relationships, have adventures, create jazz.

Previous article: UBT: “The Second Mountain: The Quest for a Moral Life”
Next article: Snark and Dance Tunes