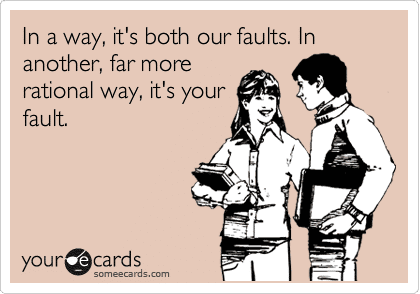 If you’ve been through the meat grinder of betrayal, you’ve probably gotten some really lousy apologies.

“I’m sorry your errant chin hair has compelled me to cheat. Belinda is always perfectly groomed. My deepest regrets on not being Belinda.”

“Apologies for me not following my true happiness. I know you only want the best for me, and I tried valiantly to live a sham life with you, fathering five children, co-signing a mortgage, and enduring 23 years of your joyless tyranny, but now I am free. And isn’t that what matters? My self-actualization?”

“I’ll make this up to you! Forever! I’ll never rest a day until….” (incoming text from Schmoopie) … “Whatevs.”

Oh sure, some of you never got any apology at all. There’s a strange honesty in that. The jig is up, why bother with lame excuses? Regrets take energy that could be better spent crafting dating profiles.

But for the rest of you, tell CN about all the craptacular ways there are to say “sorry.”