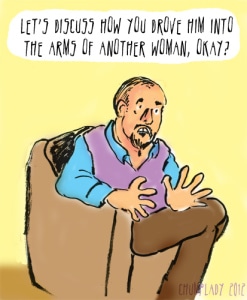 An alert chump sent me this tidbit in his Apple News feed:

“Psychologists Agree: It May Be Time to Rethink Your Monogamous Relationship
Research makes it clear that our best intentions are often worthless in the face of a compelling, and possibly unexpected, attraction to another person. The question arises then: Is it time to ditch, or rethink, monogamy as a standard? Psychologists say yes.”

I have so many questions.

Really, all psychologists agree? Did they take a vote? Were they at a giant monogamy convention (Monogapalooza!) somewhere discussing our relationships? And they achieved consensus?

All Psychologists (Intoning with One Voice): It May Be Time To Rethink Your Monogamous Relationship with Mr. CL.

Well… he has developed a disturbing fondness for sea shanties lately. Just the other day I ran screaming from “Don’t Forget Your Old Shipmate.”

I confess, I had a moment of doubt. Did I sign up for a lifetime of deafening sea shanties? Apparently there is only one volume setting for sea shanties — gusto. (Sailors are not known for their subtle phrasing.) However, I’m alarmed to learn that research makes it clear that my best intentions to be faithful to Mr. CL, are worthless.

I thought our love could rise above flamboyant quirk. That we would be the exception. The love story that defies pirate yodeling. But no.

I am powerless to the unexpected attraction of a stranger who might faldee raider my rye-eye-doe. Mr. CL could jilt me for a beer hall wench who shivers his timbers. RESEARCH SAYS.

All this time I thought, I could just flee sea shanties. Or get noise canceling headphones. Or take a deep breath and remember that Mr. CL tolerates a lot of my flamboyant quirk. (Pinecone elves, English boys choirs, rhubarb worship.)

But the Monolithic Psychologist Collective has agreed that it would be best if we just fucked around.

Clearly the problem has been our unreasonable standard of monogamous commitment.

I’m also curious — if it’s fait accompli that I’m going to fuck around (YOUR BEST INTENTIONS ARE WORTHLESS!) — why do I need an article telling me this? Aren’t I a moth drawn to a flame? A lemming stampeding toward a cliff? If I have no agency, why do I need news? Isn’t my vagina doing all the thinking for me? HELLO HANDSOME STRANGER! LET’S HAVE A CONVERSATION ABOUT MONOGAMOUS EXPECTATIONS! YOU LOOK NICE. MY HUSBAND LIKES SEA SHANTIES. WILL YOU BE MY SHELTER?

It’s not as if I’m going to make a decision or something.

Previous article: What’s the Right Thing to Say?
Next article: Dear Chump Lady, Does it really get better?