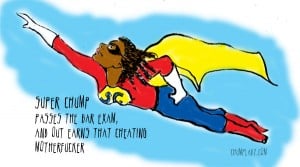 I got a really lovely letter yesterday from a person who hadn’t been chumped but reads here, and applied “Trust That They Suck” to a different situation — her employment.

She wrote to say that she Left a Job, and Gained a Life.

No more over-thinking every word lest it be jumped on and nitpicked! No more being minimized and blamed for someone else’s actions! I have more energy. I leave my work at work and don’t go in on weekends. I don’t drag myself home every day with enough will left to just feed my birds before going right to bed.

Apparently, hopium, frosted turds, pick me dancing are relevant in so many more ways than broken hearts. Fuckwits abound. 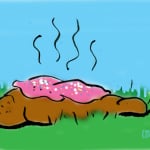 You know what helped? That cartoon of the turd frosted in pink icing. It looks enticing and festive… but it’s still errant feces! If it’s on my doorstep, negotiating with it doesn’t work. It stinks, potentially carries disease, and attracts flies. Kick that thing into the bushes and disinfect the doorstep!

Something that you have affirmed about behavior is that I could not change mine in any way to make my work life better because I was never the problem. That was a tough reality to confront, that I cannot fix everything, certainly not people, and my actual responsibility when caught in a fuckwit’s orbit is me, not them.

I admit, many a time I was demoralized because they were rewarded and enabled, and *I* shouldn’t have to be leaving. Consequence-free life for that trifecta of morons! And there you were again to remind me that my responsibility is to myself, that what I want out of my life and how to build it is more important and worthy of my time than plotting revenge scenarios or daydreaming about kicking fuckwits off cliffs.

“What do YOU want?” is something you frequently ask readers, and I started asking myself this question every day. My hopium pipe was the wishing and hoping and sarcastically commenting that some great comeuppance would unleash on them.

No. Didn’t matter how many times my desk was rifled through or the level of rudeness in emails – no one was keeping track of any of this in a Ledger of Life. So I put down the pipe and redirected what I was focusing on (although now I see them in my mind as those cartoons with asses instead of heads).

So she summoned her mightiness and left. And while it’s hard and scary and the money is tighter — for now — she says the sanity is worth it.

Being on the other side of some of my lowest valleys feels wonderful. And that’s just it, isn’t it? When we are slogging chin-deep in a quagmire of shit, of course everything smells and feels disgusting. Of course we forget or become unaccustomed to clean air and laying in a meadow. The shit quagmire isn’t normal, but I normalized it. I spent an ungodly amount of time telling myself that the quagmire is not that bad.

She wrote to say thanks.

You helped me sweep the fuckwits out of my life. You are a courage fairy.

Thanks Anonymous Fan. So glad you’re on the other side. Letters like this are why I’m here — I love the mighty. And I couldn’t do it without Chump Nation and the chorus of voices and wisdom here urging everyone to be their mightiest self.

Today’s Fun Friday Challenge is to talk about your courage fairy moments that are NOT cheater related. Did you un-chump in other areas of your life? Are you avoiding frosted turds? What’s new?