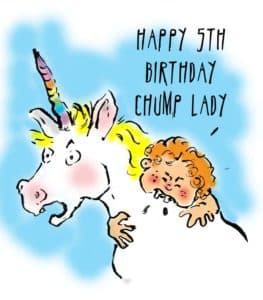 Today is my birthday and every year I rerun the first birthday column I wrote in 2012. It’s a meditation on craptacular chumpy birthdays, and what a difference a new life — and a new partner — makes.

(Not that you can’t have the new life without a new partner. This always bears repeating.) Fair warning, however, this post is goopy.

Today Mr. CL is in his usual generous form. (And he gave up on persuading me about French toast. I got a pumpkin muffin for breakfast. Yum.) Later I’m off to have a rare departure — a long-weekend vacation to London to see my good friend from Texas, Jenn, who is also having a birthday. We’re hopeless Anglophiles. There will be much tea drinking and slow walks around art museums.

I generally don’t travel without Mr. CL (unless it’s to see aging parents). But he’s not a big London fan, after one ill-fated trip in the heat of August years ago… too many tourists, too many selfie sticks… something snapped.

But don’t feel sorry for him — this weekend he’s off to Mayberry Days in Mount Airy, North Carolina. A festival of all things Andy Griffith. This has been on his bucket list a long time. He’s hopes to meet Thelma Lou, see Floyd’s barbershop, and eat a pork sandwich at “Snappy Lunch.”

(No snark about Mayberry. The man LOVES Mayberry. And you can’t hear my snark as it’s somewhere across the Atlantic ocean right now.)

Anywho… my birthday post. Here it is. And please forgive a couple days of reruns. I’ll resume regular posts on Tuesday, Oct. 1.

Well, I try not to blog about myself too much, because God, how dull. (Mommy blogging anyone? Does anyone want to know about my son’s travails with geometry?) But I’m going to make an exception today, because today is my birthday. (Cue Leslie Gore… “It’s my birthday! And I’ll blog if I want to! Blog if I want to!”…)

What does my descent into middle-aged decrepitude  have to do with infidelity? Well, my 46th birthday is a nice reminder of my 40th birthday, which sucked epically. And I thought I’d tell you about it as a little example of how different life can be post-cheater.

When I turned 40, I had just moved to a new state with my then husband for his job. I’d been married four months. We bought a 100-year old fixer upper house (with my money) and it had been badly neglected. The  widow who owned it hadn’t done yard work since her husband died years ago. But hey, you know what they say about codependents, right? Codependency is the addiction to the POTENTIAL of things. I was still a flaming codependent. I loved the potential of this ancient pile of house and I was resurrecting the garden single-handedly.

It was the day of my 40th birthday and I ordered myself a truckload of cow manure from a local farmer. He delivered it, dumped it in my yard and I spent the day ankle deep in shit, shoveling cow flop around.

At the time — swear to GOD — I thought “I’m ankle deep in shit on my 40th birthday. This must be a METAPHOR for something.”

My metaphor called me about six weeks later. It was the Other Woman phoning to let me know she existed. Turns out — surprise! — my new husband had a mistress spanning 20 years and three marriages.  No, I had NO IDEA. Remember, I’m a CHUMP. No clue. None. Zip. Zilch.

I had just moved to a no fault divorce state, financed a serial cheater’s career move, and bought a 100-year old fixer upper with this fucking sociopath.

How I got out of that mess is another story for another time (many miracles and a lot of idiocy on my part — idiocy I share with you as trial-tested results of What Not To Do). The point was… my birthday.

My 40th birthday sucked. I literally spread shit on my 40th birthday. My cheater husband’s gift to me was a pen. (Admittedly a nicer gift than the tie-dye motif license plate cover he presented to me that Christmas). And during that weekend, unbeknownst to me at the time, he was off screwing his mistress. Cherry on top of the shit sundae.

What a difference six years makes.

Today I am remarried to a great guy who is truly my better half. He’s nerdy and kind and super smart. Verbal. Bright. A mensch. A wonderful father to his kids and a rock to my son. He eats too much popcorn and loves polka music. His quirks fit my quirks. I marvel every day at my amazing fortune that this is my life and he is my husband… and I will shut up now before you choke on my treacly, heartfelt, love goop.

My husband has been pestering me for the last week about what I want for my birthday breakfast. He is a master at French toast, and tragically for him, I do not care for French toast. (“It’s JUST LIKE BREAD PUDDING! You love bread pudding!” No, it’s not the same. French toast is a pale substitute because it’s not drenched in Bourbon.) I got a sweet roll and coffee and roses for breakfast. Swoon.

He took me out on a date last weekend and gave me a ridiculously extravagant gift. He put a pressed shirt on, and the man hates to wear all things dry-clean-only. He opened my door. He bought the fancy dinner.

I’m not writing this to make you hate me. I am writing this to say  — YOU ALL DESERVE THIS. Everyone deserves to have someone in their life who delights in delighting them. Who gets honest to God pleasure from giving to them. Who  will go to whatever effort just to PLEASE you on your birthday.

I didn’t know this until I was 42 and met my husband. I spent a lifetime in my relationships shoveling shit to one degree or another. I’m not saying (sniff!) no one loved me, no one bought me a pretty present. I’m saying — I didn’t know what reciprocity felt like. What it was to love someone who loved me back just as hard, maybe harder. Who if I lobbed the ball to him, picked it up and lobbed it right back. Who threw it further into the green, past me, so that I had to run to catch it. Who (damn him) is ahead on this birthday celebration thing. But I have a few things planned… his turn is coming…

Chumps — do not settle. Good people who make effort exist. Go find each other.

Going to go celebrate some more. I’ve got a sugar coma now, between my prose and the birthday cake… maybe I’ll go take a nap… Happy birthday to me!

Previous article: Stupid Shit I Thought About Infidelity Until It Happened to Me
Next article: Dump ‘Scorned’ Already