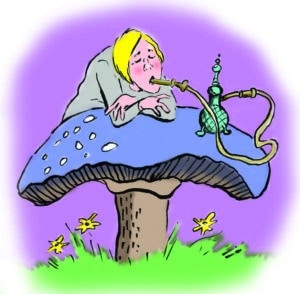 I wrote once that chumps need to “bludgeon hope with a fencepost and operate with total lucidity.” Which doesn’t sound exactly hope friendly.

But I wanted to set the record straight today that I’m not against hope. It’s all about where you direct it.

Today’s Fun Friday Challenge is to differentiate between hope (the good stuff) and hopium — a hallucinagenic drug that makes you see cheater progress where it doesn’t exist. Whoa. Is that a unicorn?

A recap on hopium:

Hopium is a powerful drug. You can hand a chump the most desperate set of circumstances, and goddamn it, that chump will work with it. Let’s just give it a year! I owe it to us to try! Sure, I can ionize my needs into tiny, undetectable particles! You’ll never get a whiff of my anger, no sir!

Hopium says, sure you can leap off that tall building in a single bound, and not go splat on the pavement, because UNCONDITIONAL LOVE! Hopium whispers, you’ll never lose a single sunk cost. Hopium exults, OMG he went to therapy! We’re good now! The Wizard of Therapy will give him a heart and we’ll click our ruby slippers and go back to our restored marriage!

Now let’s compare that to hope.

Hope says — I don’t know the future, but let’s bet on what I do know. I am resilient. I’ve got one hell of a work ethic. I give more than I get. I’m going to put those talents in service of myself and see where it leads me.

What do you suppose leads to better outcomes?

Previous article: Dear Chump Lady, She left me for her boss
Next article: I Draw Naked People