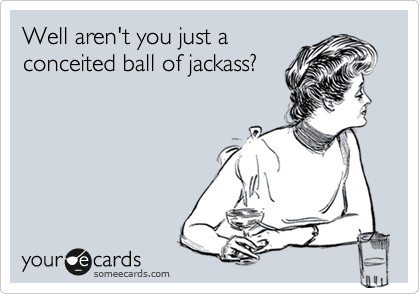 I’m sure you’re all thrilled to crumbs to learn that New York Times columnist David Brooks — deli meat snob, scourge of single mothers, and misunderstood love moppet — has a new book out.

“The Second Mountain: The Quest for a Moral Life.” From the guy who left his wife for his much younger research assistant.

Some quest. I imagine his morality has died of exposure by now, or was eaten by bears. But apparently Brooks is on a very well-funded book tour expounding on humility.

Where is the Universal Bullshit Translator? Balking.

David Brooks is to the UBT, what foie gras is to geese. Until I can find a big enough funnel, you’ll have to do some background reading (below) to prepare you for tomorrow’s take.

Here’s the UBT’s response to Brook’s entreaty in the Paper of Record that his soon-to-be-ex-wife cease her pick me dance, he has declared a winner — his ego.

I got a request to UBT David Brooks’ New York Times piece “Leaving and Cleaving.” It’s not the usual Universal Bullshit Translator fare. Instead of the drunken ex text, or breezy, blame-shifting clickbait like “25 Ways Your Outdated Haircut Made Your Marriage Fail”, Brooks has presented the UBT with a philosophical meditation on parting ways.

UBT translation of “Leaving and Cleaving”: “I Am Dumping You for My Much Younger Research Assistant.” We snarked about Brooks last week, but I felt it warranted circling back, just to dissect this enormous load of self-congratulatory wank. He wrote this about the time he was divorcing his wife of 28 years.

So much of life is about leave-taking: moving from home to college, from love to love, from city to city and from life stage to life stage.

The world is but a stage and we are merely actors. Your starring role in my life has been usurped by a much younger understudy. Exit stage left before I call security.

In earlier times, leaving was defined by distance, but now it is defined by silence. Everybody everywhere is just a text away, a phone call away. Relationships are often defined by the frequency and intensity of communication between two people.

In earlier times, leaving a wife was defined by riding the rails out of town, a Mexican divorce, or having them beheaded. But now it is defined by silence. Everybody everywhere is just a text or phone call away. Demanding answers, explanations, finding hotel receipts. I wish you would be silent.

The person moving on and changing a relationship no longer makes a one-time choice to physically go to another town. He makes a series of minute-by-minute decisions to not text, to not email or call, to turn intense communication into sporadic conversation or no communication. His name was once constant on his friend’s phone screen, but now it is rare and the void is a wound.

I love you, but I’m not in love with you. After 28 years, it’s more like a friendly roommate love. I’m moving on (with my much younger research assistant). I will think of you sporadically or not at all. Unless I need something. Like my pastel, tassel-loafer golf shoes, which I thought I packed, but apparently I didn’t. My name, once a constant, will fleetingly appear on your screen, and your heart will swell with love for me, as you rise from the wounded void of my absence to answer… I only want my golf shoes. Do you have them?

If you are like me you know a lot of relationships in which people haven’t managed this sort of transition well. Communication that was once honest and life-enhancing has become perverted — after a transition — by resentment, neediness or narcissism.

Some people have not managed this sort of transition well — leaving one’s wife of 28 years for one’s 32-year-old research assistant. Lesser mortals have mid-life crises. I, however, have managed it splendidly by writing a thinly veiled screed about your “neediness” in the New York Times. Really darling, you have failed to grasp your obsolescence.

Resentment = I resent your continued presence in my life. You have served your purpose as a birthing vessel to our three children.

Neediness = I’m a desperately needy man who needs the sensitivity and lyricism of a much younger woman.

Narcissism = I am a narcissist.

We all know men and women who stalk ex-lovers online; people who bombard a friend with emails even though that friendship has evidently cooled; mentors who resent their former protégés when their emails are no longer instantly returned; people who post faux glam pictures on Instagram so they can “win the breakup” against their ex.

Instant communication creates a new sort of challenge. How do you gracefully change your communication patterns when one person legitimately wants to step back or is entering another life phase?

I’ve posed this as a question of modern manners, when really I’m asking: how does one dump his wife for his much younger research assistant gracefully? Without anyone thinking ill of him, or casting aspersions on his character? It’s a new sort of challenge. Can one legitimately step back from the same old tired snatch when one is now entering another vagina?

The paradox is that the person doing the leaving controls the situation, but greater heroism is demanded of the one being left behind. The person left in the vapor trail is hurt and probably craves contact. It’s amazing how much pain there is when what was once intimate conversation turns into unnaturally casual banter, emotional distance or just a void.

Be a hero and sign this nice divorce settlement I’ve prepared for you. I know you’re hurt, left in the vapor trail of my awesomeness. You probably crave contact — more awesomeness, David! MORE! But ask yourself — what would a hero do?

A hero would fuck off, Sarah.

I am driven by selfishness. I am shortsighted. I am vapid.

Yet if the whole transition is going to be managed with any dignity, the person being left has to swallow the pain and accept the decision.

It’s not enough that I’m leaving you for my much younger research assistant, I will now dictate to you from the pages of the New York Fucking Times exactly how you should feel about it, the deference to which you must treat my decision, and demand a “steady wish” for my continued good.

I will shame you with an appeal to continue “sacrificial love” for me. Because I have no shame.

That means not calling when you are not wanted. Not pleading for more intimacy or doing the other embarrassing things that wine, late nights and instant communications make possible.

I, the Great and Noble David Brooks, foremost expert on Character will now publicly humiliate my wife of 28 years by dissing her pick-me dance. You LOST, Sarah. Do not drunk text me with booty calls. You are NOT WANTED.

Who will rid me of this meddlesome wife? #imissbeheadings #makedivorcegreatagain

Maybe that will mean the permanent end to what once was, in which case at least the one left behind has lost with grace. But maybe it will mean rebirth.

Leaving you for my much younger research assistant is good for you too! Really it’s for the best and all part of God’s bigger plan!

For example, to be around college students these days is to observe how many parents have failed to successfully start their child’s transition into adulthood.

The mistakes usually begin early in adolescence. The parents don’t create a space where the child can establish independence. They don’t create a context in which the child can be honest about what’s actually happening in his life. The child is forced to deceive in order to both lead a semi-independent life and also maintain parental love.

By college, both sides are to be pitied. By hanging on too tight, the parents have created exactly the separation they sought to avoid. The student, meanwhile, does not know if he is worthy of being treated as a dignified adult because his parents haven’t treated him that way. They are heading for a life of miscommunication.

I see you as mommy. It’s not sexy to fuck mommy. I want the liberation of younger pussy.

You forced me to deceive you with your constant helicopter parenting of me. I must have my independence. I am a dignified adult.

But if the parents lay down sacrificially, accept the relationship their child defines, then it can reboot on an adult-to-adult basis. The hiddenness and deception is no longer necessary. Texts and emails can flow, not as before, but fluidly and sweetly.

If you accept this sacrificial hero shit sandwich, my double life will no longer be necessary. I can marry my much younger research assistant, and hey, we can still be friends!

Communications technology encourages us to express whatever is on our minds in that instant. It makes self-restraint harder. But sometimes healthy relationships require self-restraint and self-quieting, deference and respect (at the exact moments when those things are hardest to muster). So today a new kind of heroism is required. Feelings are hurt and angry words are at the ready. But they are held back. You can’t know the future, but at least you can walk into it as your best and highest self.

Sometimes healthy relationships require not fucking the much younger research assistant. They require self-restraint, self-quieting, deference, and respect to one’s family. I am not that hero. I will fuck the much younger research assistant and I will justify my decision on the pages of the New York Times. I blame my wife for not being her best, highest, sacrificial self, when in fact, I was not my best self. I am a hypocritical douchebag. #character

Previous article: Dear Chump Lady, Is this weird?
Next article: UBT: “The Second Mountain: The Quest for a Moral Life”