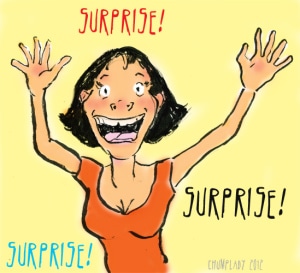 I was wondering if you cold address a topic on your site. I know you use humour a lot, and while this topic isn’t funny, I was hoping you could discuss it.

I was adopted, and in the process of looking for my biological parents, I joined a couple of online support groups.

Something I am seeing more and more are adults coming forward who have found out the man who raised them and who they have always believed to be their father isn’t. Their mother had an affair and got pregnant, but never told anyone. I guesses they figured no one would know and no one would be hurt.

In the past, that may have been the case, but with DNA testing becoming more common, more people are finding this out. Some are even finding this out in their 70s and 80s, and it’s really painful for them. One described it as feeling like they had been punched in their stomach.

Then there’s the people who find out their biological father was married and their mother was having an affair and got pregnant either by accident or on purpose. This looks to be every bit as painful, and they find themselves having to explain to their newly discovered half siblings what went on.

It’s bad enough that someone has to screw up their own life… do they have to do it to an innocent child as well? Mind you, I’d be happier to have found out my background was that prosaic.

I was hoping you could mention this on your site. It’s so sad to see how cheating can impact families even decades later.

Thanks for bringing up this topic. I hope some of our guy chumps are reading today, because while I devote a lot of column inches to gender-specific shit like being cheated on when pregnant, paternity testing is a horror unique to the guy chump experience.

To be betrayed is to examine everything in your life and wonder what was true and what was a lie. Just exactly how badly were you duped? Did our friends know? Did I flip a burger for this guy at my backyard BBQ?

It’s an unfolding series of betrayals. And the general discourse on infidelity fails to mention this. It’s not JUST that your wife cheated on you, it’s that her girlfriends knew she was doing it, and they smiled at your face and accepted your free legal work. Or your in-laws knew.

So, there’s that lie — who knew when you didn’t. Who kept secrets and laughed behind your back, and used you. But then there are the lost opportunity costs of If I Had Known…

I wouldn’t have put the cheater through college

I’d not have sidelined my career

I would’ve spent time living nearer to my family…

All chumps of any gender or orientation can relate to this theft. Of being robbed of consent. You just went along investing in a shared, committed life together, not realizing that the commitment was one-sided. You deserved the choices that come from knowing the truth. And it was deliberately concealed from you.

That is shattering enough. Having to paternity test your kids is a whole other level of betrayal. The founding lie is primal — this is your offspring, and you will invest in your children.

I can’t imagine the devastation for that man, and for those kids. Will my father love me less because we don’t share DNA? Do I have to use air quotes with “dad”? Is my family really my family?

Of course, men raise children every day who aren’t “theirs” biologically. My son’s real father is my husband — he’s the man who shows up, who schlepped my to X-country practice at 6 a.m. for years, who loves him — but he chose this.

And the shit sandwich for guy chumps in this Who’s Your Daddy situation is that you can never complain about the existence of your children. Well, aren’t you glad they came anyway? Love is love!

And it is. But you’ve also been served the humiliation of being cuckholded. Of literally investing in the product of your wife’s affair.

For those children, imagine the psychic pain of being the lie. The dirty family secret. Of knowing that your very existence pains your father — the only father you’ve ever known.

All this agony because someone fucked around. Which is no big deal and we shouldn’t judge them, except they kept it a secret for 20 years, because…. trifle.

I hate when cheaters spin themselves as Architects of the Greater Good.

The cheaters get to extract value from the chumps — raise my child — and then they also want the Sad Sausage narrative of I Had to Lie Because No One Would Understand. Or they were brave martyrs to their love. Or they did it to protect everyone’s feelings!

The only feelings the cheater was protecting were their own.

To chumps and to kid chumps discovering their parentage — my advice remains the same on “What Was Real?” — you’re real. You brought your a-game. You invested. You cared. You’re still you. These lies are no reflection on you. You’re not a lie. Carry zero shame.

That ignominy belongs to the cheater. The Potemkin partner, the puppet master of lies.