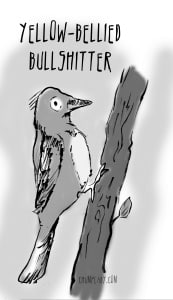 The Universal Bullshit Translator has choked down Lori Gottlieb’s “Dear Therapist” dreck before. But like an undigested glob of upchuck, she’s back. Splat. With advice so awful, I think she’s punking us.

I submit to you: “Dear Therapist: My Girlfriend Had an Affair With My Co-worker — I’ve forgiven her, but I can’t forgive him.”

A man, Chris, writes in to say his girlfriend fucked his co-worker. HIs problem? (If you answered: “His cheating girlfriend!” you answered wrong.)

We are in the same (large) department, and I still see him often in the common areas. I haven’t talked to him since this happened, and I have no desire to communicate with him. In fact, just seeing him has a visceral effect on me. My breathing increases; my heart races. I have a strong urge to punch and break things to get this “fight response” out of my system. The passage of time hasn’t lessened this feeling, and it completely disrupts me, sometimes souring my mood for the day. I don’t want him to have this effect on me or to have my day disrupted like this.

Chris, people have left jobs for less. Mold in the AC vents. The wrong swivel chair. Dude, there are OTHER jobs and other girlfriends. Go find them.

Oh, sorry, that was a lucid interjection of common sense.

No, the correct answer was…

You might find a moment to take your co-worker aside and say something like, “It’s been really awkward for me to see you at work after what happened between you and my girlfriend, and for both of us to pretend it didn’t happen. I wonder if you’ve felt just as awkward and wanted to say something to me. I’m not interested in details or anything like that—I believe everything my girlfriend has told me and we’re doing much better now. All I want to say is that your part in what happened hurt me deeply, and I thought you should know.” Then stop talking and let him fill in that space however he chooses—even if you have to wait through an excruciatingly long pause.

Just clear the air! Have the chat! I’m sure the man who fucked your girlfriend cares about your pain. Your relationship is so much better now? He was on pins and needles waiting for that status update. Now excuse him while he goes and sobs in a corner with regret.

He may not sign your yearbook — all that matters is that you hit your head with a shovel.

Gottlieb “can’t emphasize enough the value of speaking the unspeakable.”

1.) You let Chris go on believing he made his girlfriend cheat.

I now fully acknowledge the part we both played, and after a period of acute anger, I came to the conclusion that I still love my girlfriend, and that I was as angry at the infidelity as at the fact that we had let the relationship get as low as it did.”

Chris isn’t responsible for how his girlfriend responded to relationship unhappiness.  Women who love you don’t weaponize your co-workers.

2.) You embrace this whole forgiveness reconciliation idiocy and never once challenge if a “traumatic” relationship is a relationship worth keeping.

3.) You’re utterly two-faced about “trauma.” If you really believed that infidelity gives chumps PTSD and the experience is traumatic (yes to both), then it doesn’t follow that you’d encourage reconciliation or minimize it all as “awkward.”

Awkward is we both wore the same sweater. Awkward is telling a joke that fell flat. Awkward is your fly is unzipped.

So which is it Gottlieb? Traumatic or awkward? If you really thought betrayal was traumatic why would you tell someone to STAY with the person who traumatized them? Because you had a CONVERSATION about it?

“Unacknowledged trauma is like a double dose of trauma; trauma needs air, and if you can take the initiative to give it some, you’ll breathe more easily too.”

Trauma needs for the victim to get the fuck away from what is traumatizing them and not go back for second and third helpings of shit sandwiches.

I get the whole Take Away His Power! Say Boo to the Ghost! Cross That Bridge And Cure Your Phobia! school of Harrumph You Don’t Scare Me.

You’re dressing it up like that — and that’s not what this advice is. This advice is meet abuse with more vulnerability. And that advice is bullshit.

You know what the proper response is to a girlfriend who fucks your co-worker?

Previous article: The Pollyanna Blameshift
Next article: Dear Chump Lady, When does the pain go away?