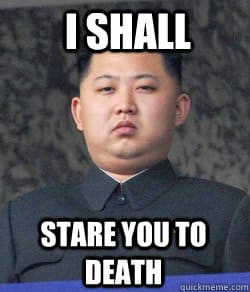 So what about those dead-eyed stares, huh?

The other day a thread broke out on the blank look cheaters give you when you confront them with their lies.

What is that look? Condescension? Vacancy? Amusement? Are the manipulation wheels spinning so fast, the facial expressions are set in neutral? What’s going on in there?

I remember unearthing some ghastly nugget of truth and confronting my ex with “So, are you a pathological liar, or what?” and he just smirked. Didn’t deny it. Didn’t affirm it. It was just sort of “Yeah, and so?”

Now, in his case, that wasn’t an ordinary response. The mindfuck channels usually flipped between the rage-charm-self-pity stations. He didn’t pause long before going on the offensive with the mindfuckery. And yet, every now and then Mr. Dead Eyes would appear.

If eyes are the windows to the soul, I have to conclude that sociopaths are just empty elevator shafts. Not much there except a steep drop into Hell.

So, what’s your theory?

Previous article: Dear Chump Lady, What do I do when my kids are with OW?
Next article: The Compassion Trap