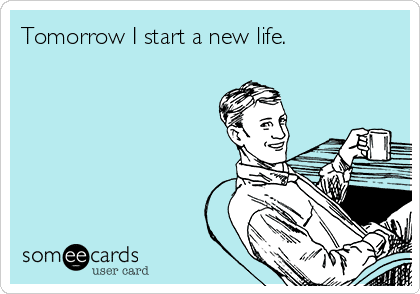 December 1, represents a milestone. This decree marks today as the end of 10 months of stressful and unwelcomed co-existence, of witnessing constant and tangible reminders of betrayal, of enduring verbally and emotionally abusive language, and of harnessing all of my inner strength to avoid scarring my daughters with the sights and sounds of parents at war.

In honor of the occasion — and looking forward — he’s created a new set of vows for himself.

A promise is a test of personal strength, of intestinal fortitude. One cannot make a promise to someone else without by necessity making a promise to one’s self, that of living up to these attributes. Cheaters do not keep promises — by nature (and sometimes aided by a perverted type of nurture) they are weak, they are selfish, they are deceitful. They cannot be expected to keep any promises made to others because they fail the most basic tests of principle and sincerity. For chumps, making and keeping promises is rather easy. Doing so merely means that we are being true to the ethical and moral standards we set for ourselves. We cannot live any other way.

And so, on this date, December 1, 2016, I call on the members of Chump Nation to be my witnesses as I publicly commit to a revision of those original vows, as a reiteration of the person I continue to strive to be. I ask that you consider a similar type of recommitment. Remember, the most important promise you make is the one you make to yourself.

I am forever grateful for every choice I’ve made — each triumph and disappointment, each joy and sorrow — for every twist and turn, hill and valley in life’s journey has, in some way, reinforced the standards and ethics by which I choose to live my life.

As I continue forward, I promise to learn from any mistakes I make, but to continue to always hold true to what I know to be right, decent, proper and respectful.

I promise to keep honesty and truthfulness as the foundations of my existence on earth, and to always strive for thoughtful and sensitive communication in all of the relationships I choose to nurture.

I promise to hold my children as the centers of my life and the cores of my being, and to be the most loving father I can possibly be.

I promise never to forget that, from this day forward, the trust that I place in others must never be greater than the trust I have in myself.

So Chump Nation, what do you vow to yourself in this new life?