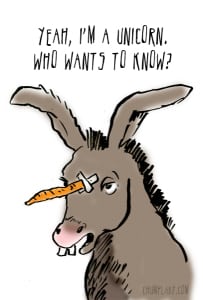 I reckon I’ve read tens of thousands of infidelity stories to date. Maybe hundreds of thousands. (I should crunch the numbers.) And one common recitation I read time and again after D-Day, is when cheaters, threatened with the loss of cake, don unicorn costumes and tell chumps that they’ve changed.

Really? Upon discovery of affairs and illicit fuckfests and diverted monies and God knows what else, we are to believe you just had an instantaneous change of heart? Saw the error of your ways and repented? Realized everything you could lose and are committed now?

You’re a different person NOW? Is this Freaky Friday?

Oh, how chumps want to believe it. At the moment of the big devalue to hear that, upon consideration! you have value after all. And all those ugly truths you discovered? The cheater is not that person, but a NEW person you can trust!

If you hear this after D-Day? Here’s your response:

You are not a changed person. Talk to me in five to ten years, after you’ve demonstrated your selfless character. No, I don’t mean stuffing the occasional dollar into the Salvation Army bucket, I mean stop cheating. Parent your children responsibly, support them, delay gratification, be kind to your parents, take ownership of your issues, and hey, maybe adopt a couple orphans or something.

Funny how your character revolution is completely dependent upon me not enacting any consequences upon you.

You’re changed? No. I’mchanged. The new person here is me. I discovered you played me for a chump. This knowledge has transformed me. Shattered me and put me back together in new ways. And knowing what I know about you now — who you really are, what you did — does not fit in my new life.

Can you change? I hope so. I hope for your soul, for our children’s future, that you can be a better person. But the fact that you’re trying to sell me on bogus, immediate character transplants doesn’t inspire confidence. It makes me think you’re a con.  You wear the humiliation and the shame for awhile and get back to me on that “new person” thing.

This column ran previously and newly discovered cheaters are still trying this line on chumps. Hold out for results.

Every time you support Chump Nation on Patreon, a unicorn dissolves into the mist.

Previous article: UBT: Thanks to your book, my husband wants to leave me
Next article: UBT: “You’re the one who still has my heart”