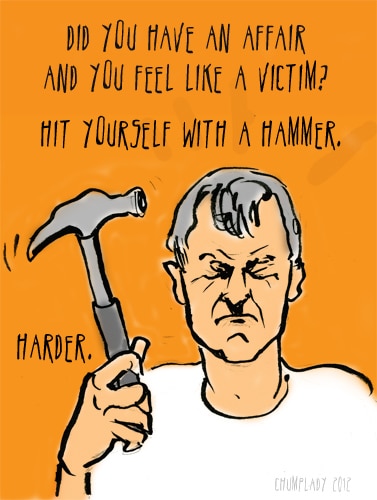 I reconnected with a HS classmate on Facebook. Only one conversation was flirty and invested (it was 2 hours long).  Other than that, it was short messages to each other. When it was her birthday, I would send a message like, “Happy Birthday to my wife in my next lifetime” – because, she was married.  This is kind of my personality as a single, never married, 46 year old. It’s meaningless banter, not to be taken seriously, but I was attracted to her.

So we meet when she’s in my town. She lives 3 hours away from me. In my mind and heart, it was to reconnect as FB friends/old classmates and nothing more. But when we met, there was a ton of chemistry.

I still saw her as single in my mind – but – I knew she was married.  Now, I made my mistake right here. I do have values (I’ve never before been with a married woman, despite opportunities).

She told me that her marriage has had problems for years. She said she and her husband were separated, living in separate bedrooms, no intimate contact.

She expressed her feelings and a very deep, emotional, relationship began (long distance).  She has two teenage kids.  We talked and texted every day, all day.

For me, I was in love with her and if you read the 20,000 texts and chats, you would feel that she is too. I’m lost in love, best way to describe it.

Last spring it turned sexual. (In her parents’ house with parents sleeping upstairs above her. She snuck me in.)

Once sex was involved, I wanted to define the relationship.  I was clear that I was in love and wanted a loving, exclusive, monogamous relationship. And, according to her words, she did too.

I have issues equating sex with love. I told her about this and she said all the right things, about how I could trust her.

So, again I wanted clarity from her — and she said that she cannot just pick up and leave a marriage of 21 years, that it’s going to take time. She wants me to understand that she’s “doing all she can” to give the appearance of saving her marriage so she doesn’t look like the bad guy to her children. So, I “understand” as a sign of support.

More months go by and it’s the same story — it takes time to leave, etc. Finally, I confront her (I think she’s still sleeping with her husband) and yeah, she confesses she’s been with him the entire time! She tells me she’s never been separated, but she wants a relationship with me.

Now for the bad part…  Her husband finds out because he discovered a love letter. She tells me, okay, NOW they’re really separated. I caught her in more lies, but (mistake) I was still hooking up with her.

Then, I don’t know if I did the right thing, but I wrote a letter to the husband. I felt betrayed and lied to. I still believed in her “love” and that she was stuck. I wanted it all out on the table. She had told me that he knew everything about our relationship after he found the letter.

Well, what I received was the most painful, hateful letter from her that she does not love me, will never love me, can’t believe that she thought she did, does not have one ounce of respect or love for me, will never forgive me, don’t ever contact her again, I destroyed her family because she “fell into” a life of self-destruction and evil.

Oh, and when I sent the letter — the husband called the police on me for stalking.

Our relationship went from 100,000 I love you’s, wedding and family planning, to nothing. It’s been no contact for 19 days. I go from missing her, to feeling deceived and wanting revenge.

I’m working through your articles, I know I’m not blameless. The love train I was on made everything real and valid, I just don’t know what she felt. She made me feel like I was the love of her life because she told me I was.

I’ve heard nothing from her. Some of my friends are telling me not to be a victim and send ALL of the texts, FB chats, the one semi-nude photo she sent, her cards, two pairs of her underwear to the husband. Then others say, walk away. And others say it’s my fault because I knew she wasn’t divorced.

My heart is still holding onto the dream and my head says “it’s a lie, stop it, she lies and cheats.”

Thanks for taking the time to read and respond. I’m scared of you now. Haha.  But, I hope you can help me figure out what to do.

You wrote: “The love train I was on made everything real and valid.”

You need some serious help about what REAL LOVE looks like. Healthy love. Because this ain’t it. Not from her and not from you.

Look, you aren’t alone. Many folks need therapy and real life kicks in the teeth to learn this, but real love isn’t based on lies and illicit hook ups. It’s not about deceiving other people to get our rocks off. (I’m talking to you, Mr. I Knew She Had a Husband). It’s not about fantasy, long-distance, high school romance.

What should you do? Leave them the fuck alone. The kindest thing you can do to that betrayed husband is leave him the fuck alone. Do NOT send him the technicolor, multi-media presentation of what a skanky whore his wife is. He knows she cheated. If he wants the details, he knows where to reach you — and be grateful he’s contacting you via the police instead of going all vigilante on your ass with a threaded pipe.

It’s no surprise she threw you under the bus. It’s straight out of the cheater play book. If THAT wasn’t a clear sign that she’s a cake eating, craven, asshole for you, I don’t know what else will convince you.

What should you do? Eat the shit sandwich you were dealt. You ordered it. There it is on the plate. Don’t complain.

You are not the victim. You were a willing participant in an affair. Seriously, every time you want to indulge in self pity about screwing a married woman and mother of two (I don’t care what she promised or said to you), every time you feel bad for YOU? Hit yourself with a hammer. Hard. You don’t feel one iota of the pain that husband does, who gave 20+ years and two kids to that wretched woman.

You believed her cliche bullshit that they lived separate, and didn’t have sex? That he Didn’t Understand Her? Whatever crap reason she gave to betray him and their kids?

At the moment you realized she lied, you should’ve dumped her instead of insisting upon continuing your Valid Love.

This wasn’t love. You were in fantasy land. People who love you don’t sneak you into their parents’ house to fuck you. You know what kind of guy that makes you? The kind of guy you don’t take home to Mother. Did you smoke dope behind the bleachers afterward? Sane, middle-aged people don’t behave this way. You’re 46, not 16.

Get yourself into some serious therapy ASAP. You are attracted to emotionally unavailable assholes. You’ve never married and yet some fantasy, disaster hook-up sounded like a good idea to you. This is a sign you need BIG, PROFESSIONAL HELP. I’m not being snarky or flippant. You don’t know what intimacy should look and feel like. When you get right in the head, sparkly, deceitful cheaters will hold no appeal to you. You’ll enjoy real life and real people who live with integrity.

The whole fact that you wandered down this rabbit hole as far as you did, tells me you’ve got some serious problems. Work on it. It’s not fatal. You can get it right the next time.

But you need to totally detach from this woman. No contact. Ever.

Oh, and your friends? The ones who said this is your fault for screwing a married woman? Hold them close. These are real friends with real values. The others who want to wage some Jihad on the husband and send him the sexts? Dump those sociopathic motherfuckers.

I mean it on the therapy. You could have a healthy relationship someday if you got your head and your moral compass together. Don’t waste another moment mourning Miss Cake.

Previous article: Dear Chump Lady, How Do I Move On?
Next article: “It Wasn’t About You”